What procedural justice taught us about fairness and rule enforcement

In many ways, Twitter is a reflection of real-life communities. And just like in real life, how the rules are expressed and enforced is an important part of maintaining a safe and healthy platform: Are the rules clearly understood or communicated? Do they allow for people to have a voice? Can they appeal or speak their concerns? Do the enforcers treat the community members with respect and dignity? Are they responsive to the community’s needs? Are they fair?

These are some of the questions at the core of the procedural justice model. It posits that how an authority treats people and earns their respect is a more powerful motivator for community members to follow the rules than deterrence alone, which relies on making sure they fear the consequences of failing to do so — follow the rules or else.

Procedural justice is a more holistic way of thinking about how authorities go about ensuring adherence to or compliance with the law. It calls for treating people with respect and dignity, providing them with opportunities to exercise their voice or have input into policies, and ensuring a fair, transparent process — one that values how authorities treat people over outcomes alone.

“The standard conceptual framework was if you want people to obey the law, you have to make sure they fear the consequences of failing to do so. Well, that doesn't seem to work, if you actually look at the research,” says Tracey Meares, a professor at Yale Law School and a co-founder of the Justice Collaboratory.

In the last decade or so, the principles of procedural justice have been gaining momentum — and not just among civic agencies. It’s also being adapted in organizational settings, such as schools, hospitals, and businesses. Why not on a social media platform?

Meares argues that focusing on “community vitality as a goal rather than merely identifying and punishing bad behavior” is a greater motivator to building compliant and cooperative online communities. This is the core message from a recent article she co-authored with Justice Collaboratory co-founder Tom Tyler, and Farzaneh Badiei for the Yale Journal of Law & Technology. “[J]ust as in the real world it is better to facilitate and encourage healthful community interaction to avoid crime, platforms should engage in the project of creating infrastructures to encourage strong, healthful communities online,” they wrote.

Thinking through this approach is important for a social media platform like Twitter, where conversations can flare in an instant, and the potential for harmful or abusive interactions is a constant concern.

In many ways, the onus is on Twitter to set behavioral norms on the platform; how the company treats its customers who break the rules will reflect its values of fairness and transparency.

On Twitter, how people perceive the rules and their relationship to them and “the authorities” — Twitter itself in this scenario — plays a significant role in setting behavioral norms on the platform.

“We found that most people want to comply. They've told us, ‘If you tell us what the rules are, we will follow them.’ They just don't know what they are. So it seems like some low-hanging fruit to educate,” says Anita Butler, Twitter’s design director who oversees health, privacy, and identity.

Butler says that there is a heightened awareness within the company to provide more transparency to customers, which is a direct result of adapting the real-world principles of procedural justice. 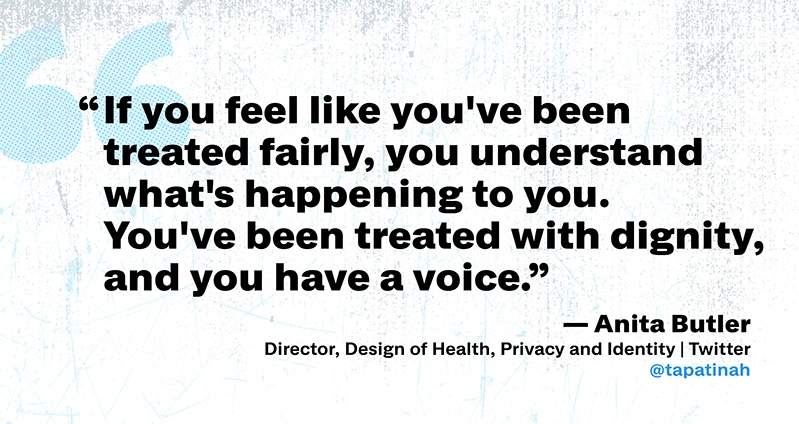 One way that Twitter has been incorporating transparency and education into the platform is through its use of prompts. Let’s say you try Retweeting an article, but you haven’t clicked into it yet; if you try sharing it, a prompt appears that says, “Want to read the article first?” That’s a simple prompt in action.

“That was our less controversial kind of entrée into this space,” says Butler.

Next on Twitter’s list was figuring out how to help people reconsider saying something they’ll regret. Here, they developed and tested a reply prompt, which asks people to pause before pressing send on a reply it has detected could be potentially harmful or abusive. (Right now, this tool is only available on replies to other Tweets and only in English, but there are plans for expanding to more languages.)

“This reply prompt is education but also hits transparency because now we're trying to tell you beforehand, ‘We think this might be harmful. You may want to reconsider.’ What I don't want is to have educational moments that are just ‘Read our rules,’” says Butler. “We want them to be in the moment and relevant — otherwise, nobody cares.”

Early tests of these latest prompts have netted some positive results, with more than a third of people reconsidering their replies when prompted. Additional results found that after being prompted once, people composed, on average, 11% fewer offensive replies in the future. And perhaps expectedly, if nudged, people were less likely to receive offensive and harmful replies. (Read more about Twitter’s reply prompt results from Butler and co-author Alberto Parrella, a product manager at Twitter.)

Butler and her team want to test more holistic ways of educating and empowering people on Twitter.

“When we apply these principles, we found that people are more accepting of the outcome. Maybe you were temporarily banned from the platform. Maybe we had to limit how many people viewed your Tweet or take it off the platform because it was violating one of our policies,” she says. “People are more accepting of those outcomes if they feel like they've been treated fairly.”

But it isn’t all about the outcome, Butler says. It’s also about the process and the trust and respect it generates with customers.

This Tweet is unavailable
This Tweet is unavailable.
Tweet Twitter logo icon
Tags:
Link copied successfully
More from Stories
Is it possible to build more kindness into Twitter?
By on Tuesday, 21 September 2021
Don’t @ me: Protecting your peace with “Unmention”
By on Monday, 25 July 2022
How Twitter is nudging users to have healthier conversations
By on Wednesday, 1 June 2022
Twitter’s new reporting process centers on a human-first design
By on Tuesday, 7 December 2021
See what's happening