Don’t @ me: Protecting your peace with “Unmention” 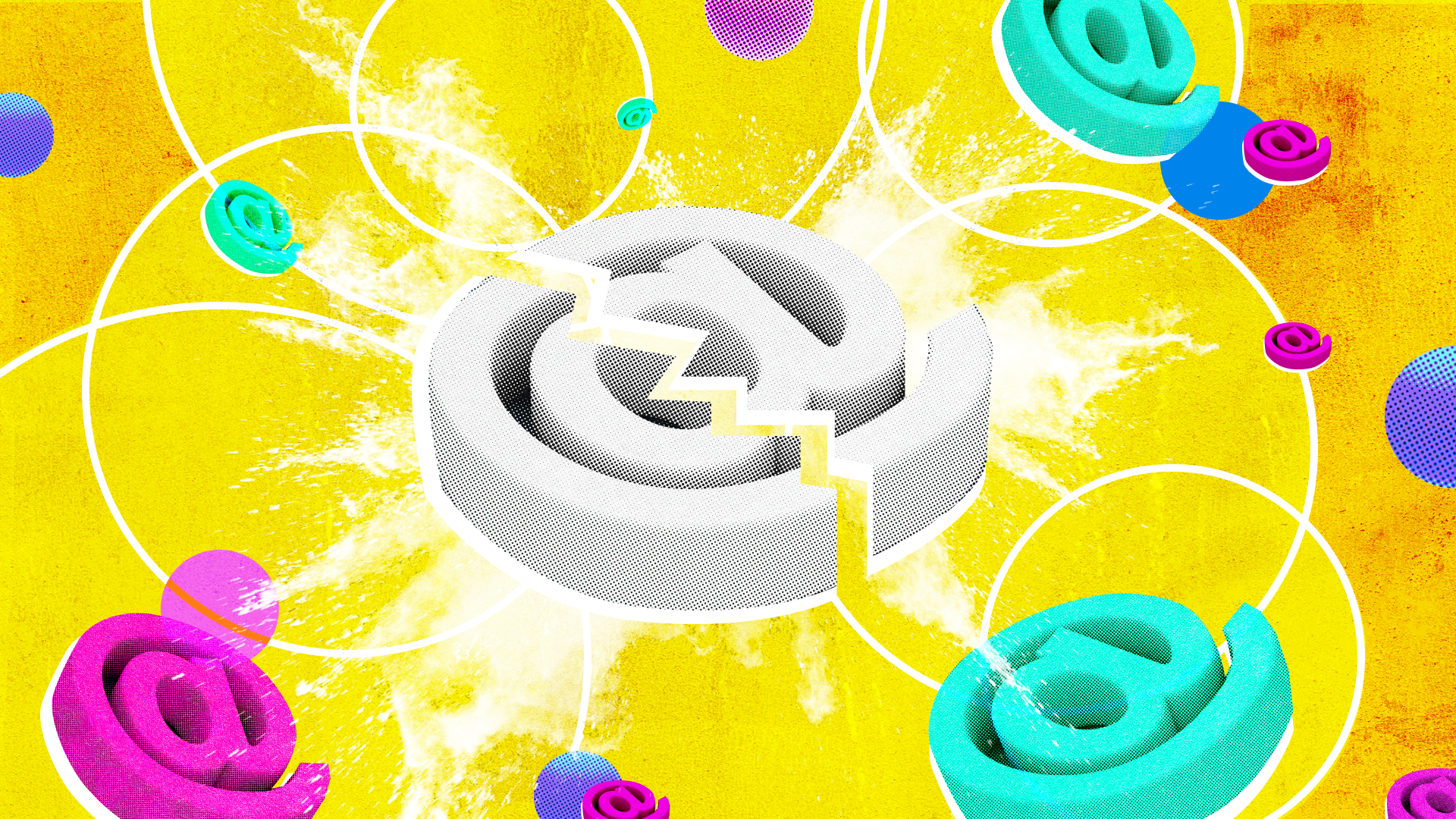 When Mide, aka @hourlytacha, logs on to Twitter, it’s to share news and connect with other fans about her favorite celebrity: Big Brother Nigeria star Symply Tacha. The London-based property business consultant said Twitter is her favorite place to be a fan. She’s built a community both online and IRL.

“I just feel like people are more organic on there. It's very easy to meet like-minded people because you're mostly tweeting your thoughts,” she said.

But sometimes that stream-of-consciousness can backfire. Mide, who sometimes wades into Symply Tacha’s replies to defend her fave, said the reality star received death threats on social media after she marched in protests against police brutality in Nigeria. On a regular day, Tacha receives so many unwanted comments that Mide and her fellow “Tacha Titans” started a campaign to send Tacha positive messages.

While Twitter has strict rules against abusive behaviors such as violent threats, racist attacks,  targeted harassment, and hateful conduct,  other types of language that may still be unwelcome—such as an insult—doesn't quite reach the threshold of a rules violation.

Mide herself has also been on the receiving end of insults and offensive comments because of her fan activity. She’s been inspired by her celebrity friend, whom she texts with occasionally, to rise above the criticism.

“Initially it used to get to me because it is difficult when you're having a bad day and then you go online and someone's insulting you.” she said. “You get all these slut-shaming people calling me broke—all these things. But with staying in touch with [Tacha], one thing she's always been all about is just: Be who you are.”

To help people like Mide step out of unwanted interactions, Twitter has created a new tool to help them control their mentions. “Unmention” lets you untag yourself from a conversation, so you can no longer be mentioned in replies. Unlike “Mute this conversation”, this new tool gives you the ability to leave a conversation and then prevents others from mentioning you in that conversation; instead your handle appears as text instead of a link to your profile. Project manager Sam Walsh said it helps to “break the connection between a conversation and [a person’s] identity.”

The goal is to give you more control over your experience on Twitter by preventing abusive language from reaching you—and invading your notifications. It also helps to slow down traffic to your profile.

“We were noticing that a lot of people were getting unwanted attention on the platform. For example, [celebrities] or female journalists were constantly getting harassed through mentions,” said senior product designer Dominic Camozzi, who led the user experience design.

It’s about empowering conversation, not shutting it down

Folks on Twitter have been requesting a “Don’t @ me” feature for years. There have been a variety of reasons why: from the serious, such as people who are being tagged in abusive replies, to the annoying, such as people who share a name with a celebrity or those who get spam-tagged because of their perceived clout.

Unmention—found under the drop-down menu as “Leave this Conversation—was first available to some on the web, and has now been rolled out to everyone, including on mobile.

Project manager Sam Walsh, who led the team that designed the tool, said the core of the Health and Safety team’s mission is to give people agency and control over their experience on Twitter. He likened getting unwelcome notifications to someone uninvited showing up at your house.

“We don't necessarily want to shut down the conversation,” said Walsh. “But you shouldn't necessarily be able to come to someone's front door, knock on it, and make them open the door if they don't want to.”

Even people who feel most at home on Twitter, because they use it professionally and personally, still need tools to protect their peace. Syed Ali, a social media marketer and avid Warriors supporter on NBA Twitter, says in the past he’s avoided certain subjects because it can attract harassment. "I'm a first generation American. I'm South Asian and Muslim,” he said. “There have been times where I've tweeted something in solidarity and then you'll just kind of get a nasty reply or a DM from someone saying something rude or racist.”

The Health and Safety team’s long-term goal is to make people like Ali and Mide feel safe enough to stay on—or return to—Twitter. On top of tools like blocking and muting, which have been around for a while, Unmention is just one of a suite of tools that Twitter has rolled out over the past two years. Some of the others include a revamped reporting system, “Twitter Circle,” an experiment in testing which allows someone to control who can see their Tweets, and reply controls that let users choose who can reply to their Tweets.

Walsh estimates that a large majority of people on Twitter aren’t aware or don’t take advantage of privacy and safety features, something Twitter is working hard to educate folks more on. But there’s a small percentage of people, many of them from historically underrepresented communities that receive the most abuse, who want and need them.

“If we can protect this group of people who experience the most harassment, then we'll probably be solving for the needs of the general population,” said UX designer Camozzi.

When designing the feature, Camozzi thought about how to make the tool useful to those who chose to untag themselves, and want to avoid additional unwanted attention for their decision. The team purposefully designed the tool so that it doesn’t send the person who mentioned them a notification that someone has left the conversation. This is a reaction to people who screenshot the message they see on someone’s profile page when they’ve been blocked—they sometimes Tweet it as a badge of honor.

“That was a high concern for me when designing this, that we weren't providing any affordances to potential abusers for them to screenshot. And we were protecting the privacy of the people leaving the conversation,” Camozzi said.

Clarissa Laskey, a marketer who works with influencers, used to run a popular travel and parenting blog that featured her blended family, including her two children. Given the personal nature of the content she shares, Laskey said a feature like Unmention would be helpful.

“It can protect your peace. You can have boundaries and you feel like you have at least a little bit of control over your own personal account,” she said. “Having somebody just add you in something that you're not a part of makes you feel it violates your privacy a little bit.”

Walsh adds that Twitter has become “more nuanced,” investing more time and resources into building features that empower their users. That’s why the Health and Safety team has attracted people at Twitter who have a personal interest in making the platform a safer place. Nhu Vuong Weinberg, a staff software engineer who has worked at Twitter for almost 10 years and led the team of engineers building the tool, said she particularly finds it triggering to see women being attacked on Twitter.

“What I have found makes Twitter so special in the time that I've been here is just how much people care about diversity and about giving voice to folks who traditionally have not had voices before,” she said. And much of that work means protecting people on the platform from abuse and ensuring their voices can be heard in a healthy manner.

“It's so important to me as a woman and also as a woman of color,” she said. “This work means a lot to me. The more I can make folks feel safe on our platform, the better.”

For some folks, getting tagged inadvertently or being mistaken for someone else is a regular occurrence. For Damien Basile, aka @DB, his initials often get mistaken for two of Germany’s most prominent institutions: the national railway Deutsche Bahn, and Deutsche Bank, one of the world's largest investment banks.

“It can become overwhelming to have your mentions inbox just like flooded with all wrong mentions, especially if something takes off,” Basile said. “And then they get all sorts of retweets and mentions and I'm still in it. And so if I miss that initially, my mentions are flooded.”

Walsh and the team’s next goal is to build a more proactive tool that allows people to stop mentions before they happen. Right now Unmention lets someone leave a single conversation—a person has to leave each Tweet thread where they’re being tagged. But say, for example, you’re Will Smith—or your name is William Smith—and you know you’ve gone viral during the Oscars. Ideally, there would be a tool that would let the actor or anyone who would be mistaken for the actor to turn off all his mentions completely.

“That is not a problem we have solved quite yet,” said Walsh. The “‘Hey, I need a hot minute because the entire world is focusing on me.’ I want to proactively stop mentions. That's the next problem we wanna tackle.”

This Tweet is unavailable
This Tweet is unavailable.
Only on Twitter
Tweet Twitter logo icon
Tags:
Link copied successfully
More from Stories
Twitter’s new reporting process centers on a human-first design
By on Tuesday, 7 December 2021
Your Tweets, your tools: Curating the experience that’s right for you
By on Thursday, 18 November 2021
How Twitter is nudging users to have healthier conversations
By on Wednesday, 1 June 2022
The secret world of good bots
By on Friday, 29 October 2021
See what's happening