The first few months of 2013 brought a number of changes to the Twitter platform. In case you haven’t kept up with our recent announcements, here are some key highlights.

The Retirement of API v1

Several major milestones relating to the deprecation of API v1, which was announced last fall, have occurred during the first quarter of 2013.

We began conducting a series of major blackout tests to give developers an opportunity to understand the impact that the retirement would have on websites, widgets and services. If you have not done so already, you will want to move to API v1.1 before API v1 is retired on Tuesday, May 7th, 2013.

The retirement of the API will also soon make the older “goodie” widget obsolete. If your site still uses this product, please be sure to switch to Embedded Timelines as soon as possible. 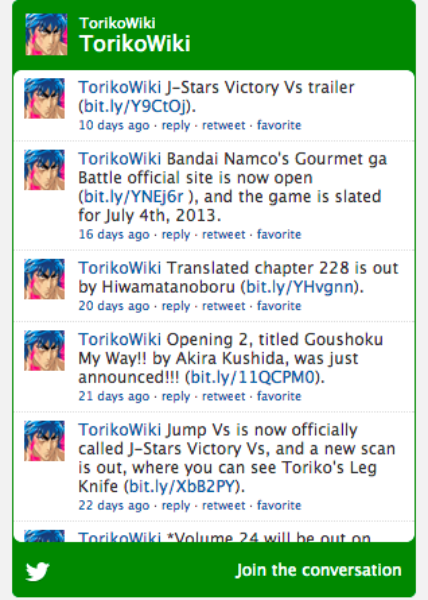 Example of a legacy widget

Lastly, we released application-only authentication for the Twitter REST API to service applications that need to interact with Twitter without bearing a user context.

We introduced several new updates for embedded Tweets earlier in the year, including improved performance, full support for Twitter cards, and the inclusion of live retweet and favorite counts. Over on Twitter.com, we made it easier to retrieve the embed code for the product (simply click the “More” option inside a Tweet and select “Embed Tweet”).

If you haven’t yet explored using Embedded Tweets on your site, you can learn more about the product here.

Earlier in March, we released additional customization options for Embedded Timelines, making it possible (and easy) to further match the style of your site, while still retaining the anatomy and functionality of the displayed Tweets. Some of the changes include allowing developers to control the header, footer, border, and background color of their timelines.

Click here to learn more about adding Embedded Timelines to your site.

We recently introduced several substantial improvements for Twitter cards. (Technically it was two days into the second quarter but we still wanted to mention the updates here!)

The second change relates to the introduction of three new Cards: app, product and gallery. The goal behind releasing these new cards is to give publishers and developers more flexibility to show new types of content.

In February, we introduced new metadata (including favorite_count and language) to Tweet structures returned by the API, helping developers more easily work with targeted subsets of Tweet collections.

A lot of exciting things are in store for the rest of the year. Make sure to follow @TwitterAPI or subscribe to the dev.twitter.com blog by adjusting your account settings here so you don’t miss any updates.