By
Thursday, 22 May 2014
Link copied successfully

From day one, the Sony team knew that integrating social was going to play a key part of its upcoming PlayStation 4 platform strategy. A successful launch and 135 million shares later, its entry into social gaming is well on its way.

Here’s a sample of #PS4Share Tweets being shared on Twitter right now:

We were fortunate enough to speak with a few members of the PS4 engineering team to discuss their insights on PS4 going social and building their integration with Twitter.

Ryan: What was the impetus for your integration with Twitter, and the thinking around it?

Stephen Yong, Director of Engineering: PlayStation has nearly 4 million Twitter followers, so integrating with Twitter was kind of obvious. Our gamers love to share and engage with their friends and we wanted to foster social interactions on Twitter. One way is to make it easy for them to share screenshots of what they are playing, straight from their PS4. We’re also seeing gamers share trailers of games they love, and even talk about their live gameplay experiences with PS4.

Ryan: That’s awesome to hear. And the “Share” button — was that hard to build?

Stephen: We wanted to make sharing easy and prominent, and there’s no better way to do that than making it part of our DUALSHOCK 4 controller.

Ryan: And what kinds of things can you share with that button?

Stephen: Gamers can easily share videos and images of favorite gameplay moments by simply pressing the “SHARE” button on the controller. With our Ustream and Twitch integration, PS4 users can also broadcast their gameplay live, with the ability for friends and other viewers to make comments on the stream and, in some cases, interact with the broadcaster’s gameplay session. Gamers love sharing their most epic moments, and sharing screenshots on Twitter has been very popular.

Ryan: Can you give an example of a recent game that has taken off?

Stephen: The inFAMOUS Second Son team recently introduced a new photo-editing tool and people have been sharing some of the most incredible screenshots I’ve ever seen.

Ryan: So for the geeks like me in the room, how did you guys build such a slick UI/UX?

JP Castro, Sr. Front End Engineer: On the front end, we make generous use of HTML5. That includes the PS4 home screen, What’s New and PlayStation Store, among other things. We’re actually pretty active in the HTML5 developer community.

Ryan: Walk me through building Twitter into that experience.

JP: For the Twitter calls, we chose to integrate directly into your REST APIs. It was actually really easy to post pictures, and get Retweet and favorite counts. We make AJAX calls, and handle the response and rendering ourselves. 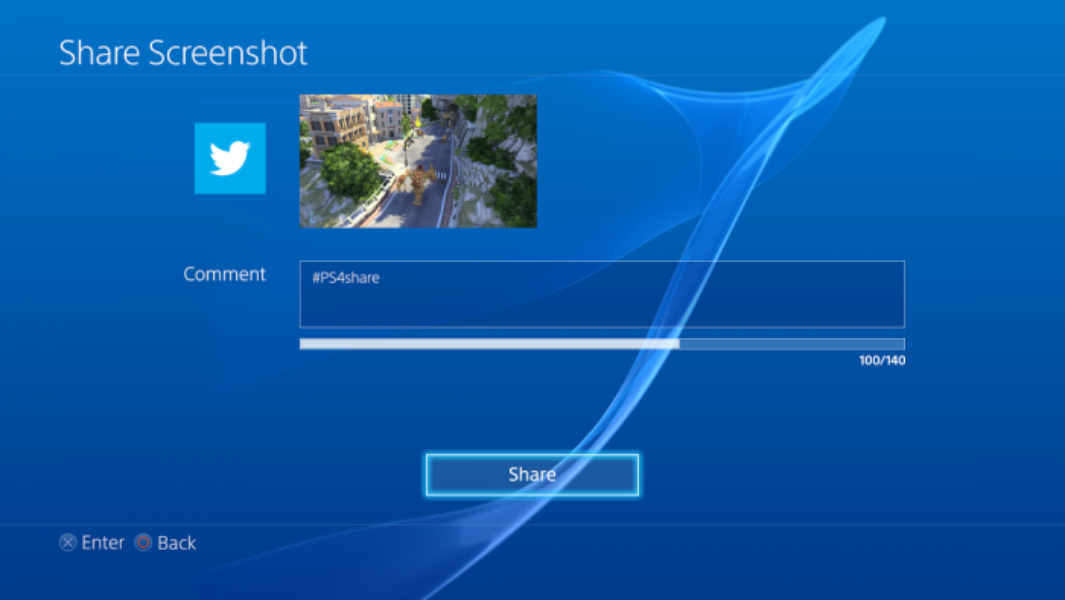 Ryan: How has the integration worked out for Sony?

Stephen: It’s been spectacular. Users really engage with the social features, and say that the screenshots are compelling. They’re excited to see where we’re going, and we’re looking to take it even further.

JP: As a developer, it’s really cool to see our original vision become something people use. Right after launch, I’d search on Twitter for #PS4Share and it’s filled with people playing different games and sharing photos from their gameplay. It’s always a new experience and just amazing to see.

If you’ve got a game console, a website or another channel that you want to make social, take a look at Twitter’s open APIs and resource of platform-specific libraries. And if you want to talk Twitter, feel free to reach me at @rchoi.