At the start of this year, we extended Twitter Kit’s media support with an enhanced video player and we were delighted to see video and GIFs from Twitter bring the stories in your apps to life. Now, we’re adding Vine support to Twitter Kit too!

Vine is a creative, bizarre, and lively medium like no other. Whether it’s Buzzfeed covering memes that punctuate a news cycle, or reactions and highlights of the big game in Bleacher Report or from the NBA, Twitter Kit now delivers Vines seamlessly to your app through Tweets. With this update, your apps automatically expand Vines in the timeline, and play loops with the same seamless, silky-smooth technique that Vine pioneered. 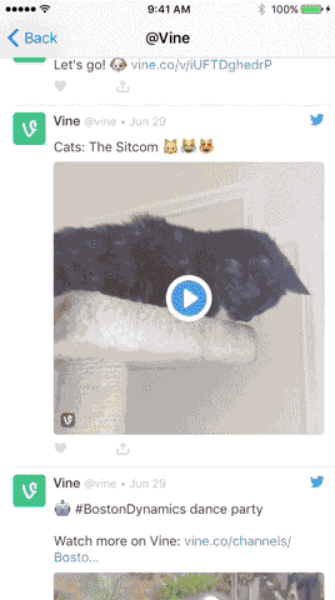 To get Vine in your app, simply update Twitter Kit to v2.3 (iOS) or v1.14.1 (Android). These releases also include updates in preparation for the Tweet object changes announced in Doing More with 140 Characters.

Stay tuned for more updates as we iterate on Twitter Kit throughout the year to make it even easier for you to build apps with the most fun, engaging, and compelling parts of Twitter. Tell us what you think by Tweeting at @TwitterDev — we’re always listening!