Today, we’re thrilled to officially release Twitter Kit 2.0 and Digits 2.0 for Android! With version 2.0, we’ve made major revisions to both SDKs, refining our libraries based on your feedback while enhancing performance and alignment with modern Android tools.

As part of the overhaul, we’ve updated major underlying dependencies: Retrofit goes from v1.x to v2.x, and with it comes v3.x of the OkHttp library that handles networking. That brings a fast, reliable, and updatable HTTP client to the core, with support for HTTP/2. This means faster and more efficient networking when talking to our APIs, while being more aligned with the modern libraries you’re already using in your app.

Updating these dependencies has also allowed us to rewrite some significant pieces of code to make Twitter Kit and Digits better: we’ve revised our networking stack, and Guest Auth tokens are now automatically refreshed for you. Both Twitter Kit 2.0 and Digits 2.0 also up our base version from Android API 9 to API 14, moving with the times as we’ve seen usage of these older Android releases dwindle. 2.0 also removes legacy functions that were previously deprecated.

We’re ecstatic to continue supporting your Android apps with the latest, most cutting edge versions of Twitter Kit and Digits. To get the latest, just click the “Update” buttons within your Android IDE plugin — we’ll take care of the rest. 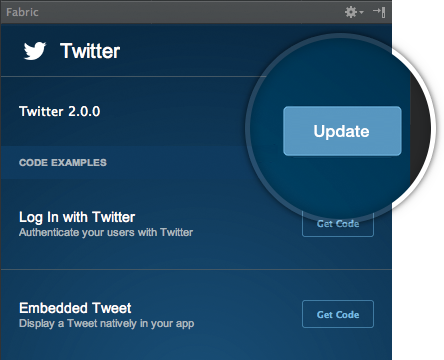 The update button within the Fabric plugin

Don’t worry if you plan to keep using Twitter Kit and Digits version 1.x in the near future. For the next 3 months, we’ll keep version 1.x available but as a heads up we’ll only be applying critical bug and security patches. So make sure to upgrade soon!

If you have any questions or suggestions, check out our docs for the Twitter Kit update and the Digits update, or join us in our developer forums for Twitter Kit and Digits.