Enabling all developers to build on the Account Activity API

By
Wednesday, 16 May 2018
Link copied successfully 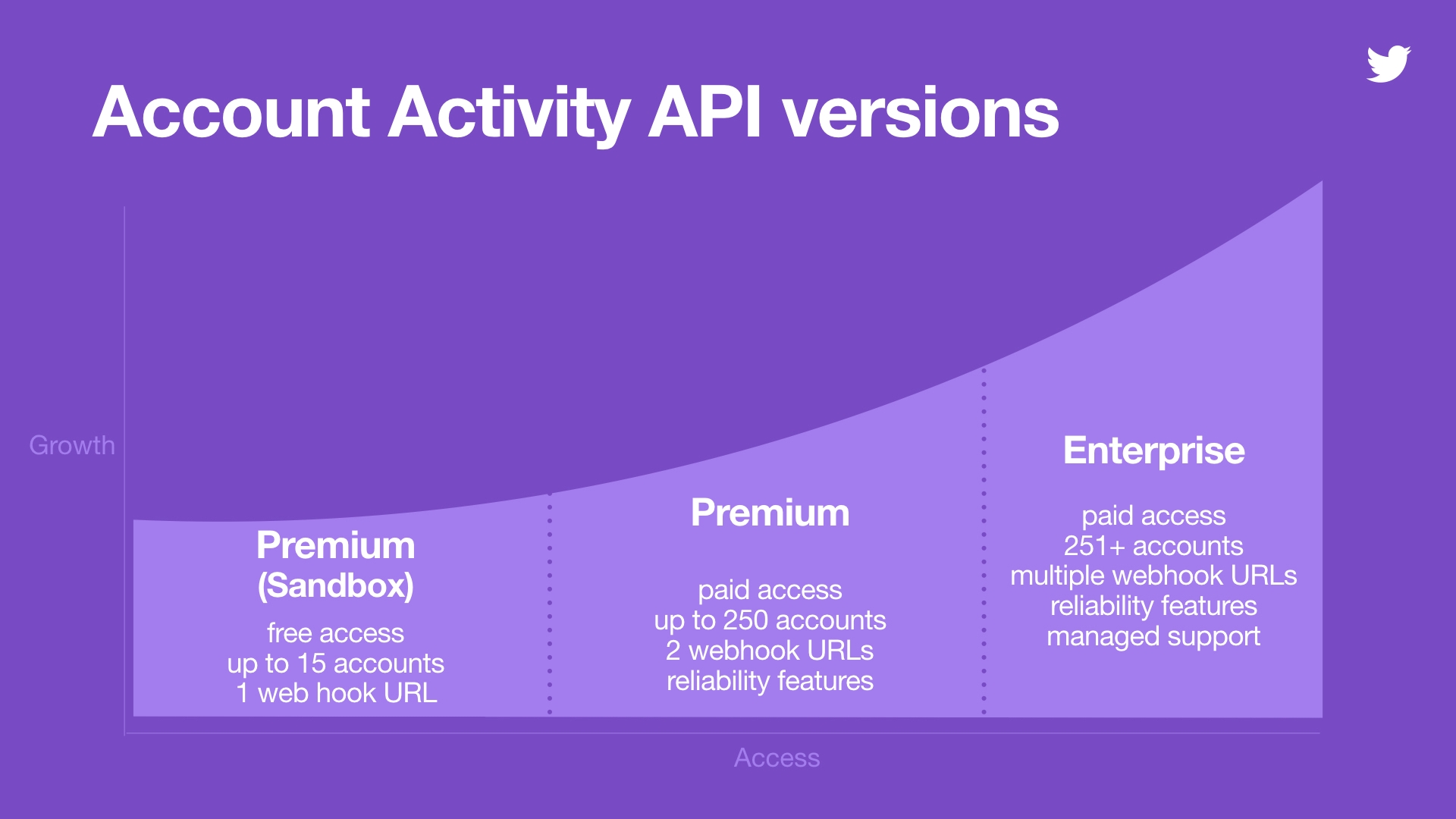 With this release, we’ve added a for_user_id payload field to all activities. This provides the user ID of the subscriber associated with every activity so developers can better understand why they received an activity and what to do with it. We also added a new unfollow event type which is sent when a subscriber unfollows someone, and we will soon start delivering another new activity type - delete events.

When we announced our plans to retire and replace Site Streams, User Streams, and our REST Direct Message endpoints, we did so as part of our efforts to improve the developer experience and provide a sustainable way to help businesses engage with those looking to connect with them.

We recently published a Tweet thread stating some changes to those plans and can now provide more details about upcoming deprecations. Site Streams, User Streams, and legacy Direct Message endpoints, originally slated for retirement on June 19th 2018, will be deprecated on Wednesday August 16, 2018 which provides 3 months from today’s release of the Account Activity API for migration.

Now that a version of the Account Activity API that delivers a full set of activities is generally available, the beta that delivered only Direct Messages will be deprecated on August 16th, 2018. Also note that, the Account Activity API allows 15 free subscriptions, a reduction from 35 allowed during the beta. This change will be effective today and will not currently impact any beta users.

We built a migration guide to assist in the transition from Site Streams and User Streams to the Account Activity API. As a few developers have noticed, there’s no streaming connection capability or home timeline data, which are only used by a small amount of developers (roughly 1% of monthly active apps). As we retire aging APIs, we have no plans to add these capabilities to Account Activity API or create a new streaming service for related use cases. Home timeline information remains accessible for developers via the statuses/home_timeline endpoint.

We created a comprehensive resources page to outline these changes to help developers understand the best way to keep solutions up and running, including links to documentation, migration guides, and a playbook.

If you have additional questions on our APIs or would like some help as you make changes, our team and expert community are available to help in our developer community forums.

This Tweet is unavailable
This Tweet is unavailable.
Only on Twitter
Tweet Twitter logo icon
Tags:
Link copied successfully
More from Tools
Introducing a new and improved Twitter API
By and on Thursday, 16 July 2020
Enabling study of the public conversation in a time of crisis
By on Wednesday, 29 April 2020
Prototyping in production for rapid user feedback
By on Thursday, 3 December 2020
A year with Twitter Developer Labs: What we've learned and changed
By on Thursday, 2 July 2020
See what's happening