The A-League called on fans to “power the game” this season, and we’ve certainly seen the power of football and Twitter play out in Australia as a result.

It seems as if nowhere else have fans had such exclusive access to the game. Players, clubs and the league all worked to ensure fans felt part of the inner sanctum and never missed a thing, and in doing saw big numbers like these that follow. During the #ALeagueFinals alone, we saw a 165% increase in the number of Tweets sent compared to last season.

To the victor goes the spoils, with the Brisbane Roar using Twitter to celebrate with their loyal fans:

While the A-League captured the winning moment with a Vine video:

Throughout the season we saw over two million Tweets using official match day hashtags or club and player handles. The most mentioned club was Sydney FC, closely followed by Melbourne Victory. 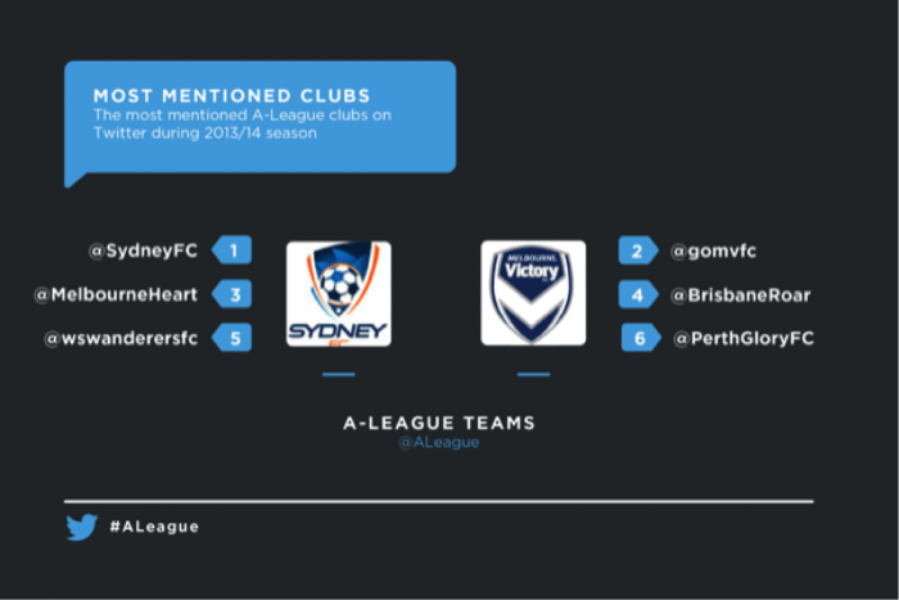 No surprises when it comes to the most tweeted game. The #ALeagueGF was a cracking contest and went into extra time before a winner could be found. Both the Melbourne and Sydney derbies also generated huge amount of interest and Tweets. Here are the top six most mentioned matches from the season: While fans flocked to Twitter throughout the season, the official A-League account used Vine videos extremely well during the #ALeagueFinals. Through the @VineApp, they delivered 6-second videos embedded directly into Twitter users’ timelines. Here are a few of our favourites:

One of the unique things about Twitter is the ability for athletes to easily connect with fans, while providing an insight into the life of a professional football player. Hundreds of A-League players are on Twitter, and here are the best of their Tweets from the 2013/14 season:

The 2013/14 A-League season saw each of the 10 clubs use Twitter to tell stories, engage with fans and deliver unique content in real-time. Fans love their teams, and clubs ensured fans heard it first on Twitter, felt connected with the club and became members of the inner sanctum.

As the A-League season comes to an end:

It only gets more exciting for football fans in Australia as the Socceroos head to Brazil for the World Cup.

The #WorldCup will be the biggest event in the world this year and if you can’t be in Brazil in person, Twitter is undoubtedly the next best experience. In fact, we’ve seen more Tweets over the last 90 days than during the entire 2010 tournament. See you on June 12th for the #WorldCup opening game — and #GoSocceroos!