The #Sochi2014 Winter Games have kicked-off in Russia, but more importantly for those of us at home in Australia, also on Twitter. No matter where you are, you’ll able to follow all of the action in 140 characters (or six seconds with @vineapp) through the eyes of the teams, countries, athletes, fellow fans and journalists.

The @AusOlympicTeam has arrived in Sochi…

… are looking great and set to take on the world’s best.

To ensure you don’t miss any of the wintery goodness, you can follow accounts such as @AUSOlympicTeam, @Olympics, @Sochi2014, and Australian TV broadcaster @SochiOnTen.

You can subscribe to this list of Australian athletes and other interesting accounts who will be chasing gold, or covering those chasing gold, over the next two weeks. This list of participating countries, teams and broadcast partners will keep you connected with all the official accounts throughout the games.

Leading up to the start of the games, the roar of the crowd can be heard around the world. This map by our own Simon Rogers (@smfrogers) shows Tweets about the Winter Olympics (ranked by Tweets per million population) in eight languages over the past week. (We will update the map throughout the games.)


Click on the map to interact with it or make it full screen by clicking on the top right corner.

The @AUSOlympicTeam account is providing world-best coverage, with exclusive pics, @VineApp videos, stats and access to our best athletes:

If you’re looking for a more global experience, athletes representing countries from around the world are tweeting exclusive pictures, videos and their thoughts:

While new stars will undoubtedly emerge throughout the Winter Olympics, here’s a look at the six most-followed Australian athletes entering competition: 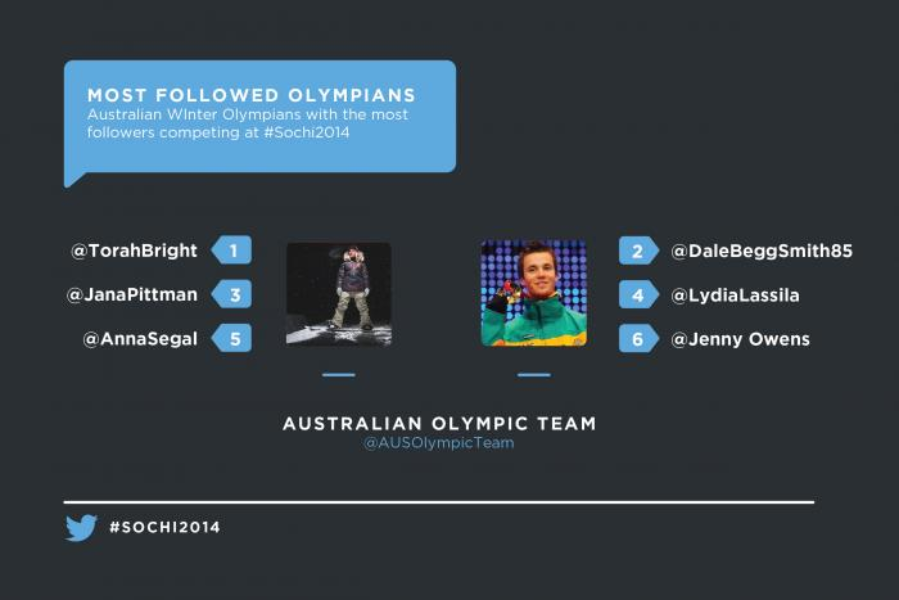 For more details about the Australian Winter Olympic athletes’ experiences at Sochi, here is a list of all the participating athletes and official sporting organisations that you can follow right now: https://twitter.com/AUSOlympicTeam/sochi-winter-watch/members

If you’re looking for a couple of our favourite athletes to follow, a good place to start is with our flagbearer Chumpy Pullin (@chumpypullin), Snowboarding Gold Medalist Torah Bright (@TorahBright) and Alpine Skier Emily Bamford (@embamford).

For regular updates, you can also follow @AUSOlympicTeam and @TwitterAU.

Only the world’s best athletes get to experience the thrill of marching at the opening ceremonies. Check here again for coverage from #Sochi2014, including data from the Games and top Tweets from athletes and fans.