Get a first look at “The X Factor Auditions” on Twitter

When you’re producing a show as highly-anticipated as @thexfactor_au, one of the biggest challenges is how to tease the upcoming series without spoiling your stories — especially when you’re filming that show in an arena filled with fans all equipped with smartphones.

The #XFactorAU Auditions for this year’s upcoming series have just wrapped filming. If you’ve been following @thexfactor_au, you have had an exciting preview of what’s to come. Realising the excitement that surrounds each year’s auditions, the producers of the show cleverly adopted a “tease, not spoil, strategy” by tweeting content that gives fans who couldn’t attend a sense of the event while not spoiling the upcoming show. They did this through cryptic overheads, teasing photos from the official account and the show’s talent, and a Twitter Q&A with the host Luke Jacobz.

While the producers didn’t want to reveal the details of each contestant, they did want to give the audience a sample of the variety of talent that was lining up to impress this year’s returning panel. They tweeted out #Overheard comments from the judges’ desk covering everything from the truly stunning to the stunningly bizarre. To be a fly on the wall at this year’s auditions, all you had to do was search for the #Overheard hashtag. Here’s a custom timeline of some of the highlights:

Tweeting photos is a great way to give fans a behind-the-scenes look at your show as it’s being shot. With the latest features in the Twitter app, you can use in-app filters to make your photos look even more stunning, and the in-app cropping tool to remove any spoilers.

Photos are now even more social with the recent addition of photo-tagging, so you can tag friends and followers in photos. This proved especially useful during the auditions when familiar faces from previous series joined the crowd.

Sometimes there’s a moment you want to share that’s so awesome you need more than one photo to express it. Luckily you can now upload up to four photos into a single Tweet in the Twitter app. When you have four superstar judges walking the red carpet, this can prove useful!

In an Australian first, @thexfactor_au partnered with @bumebox to run a Twitter Q&A with the host @LukeJacobz. Fans could chat directly with Luke on Twitter and ask questions about how the Auditions had gone. This real-time public conversation was a perfect opportunity to engage with fans who couldn’t be there in-person. 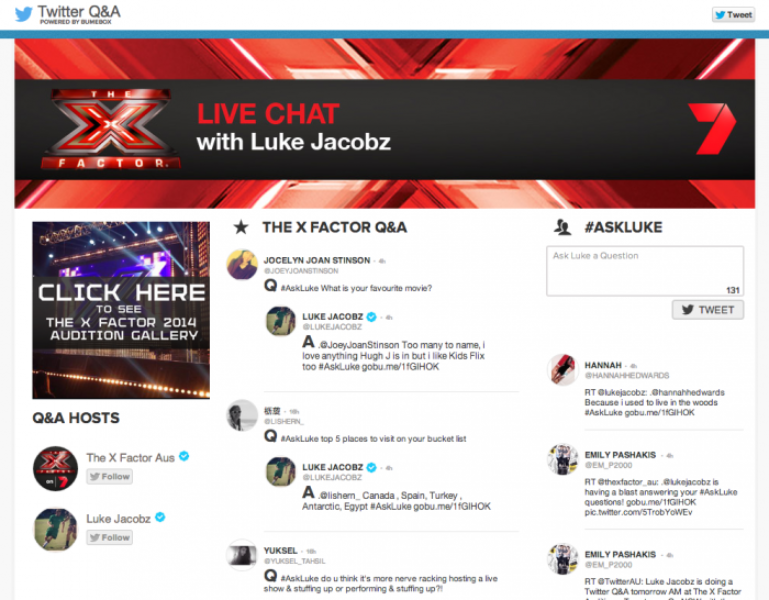 Accompanying the official account, there was also a lot of great content being shared by Luke and the four judges on the panel — @RonanOfficial, @NatalieBassing, @DanniiMinogue and @Redfoo — highlighting the fun going on backstage and in the auditions arena.

By successfully adopting a “tease, don’t spoil” strategy, #XFactorAU fans in the audience quickly learned how to tweet-along to the Auditions without spoiling future episodes for fans.

Like any fan of The X Factor Australia, it’s hard to believe the show is still months away, but one thing that’s certain is that these updates have made the wait a little easier. If you want to continue to follow The X Factor journey be sure to follow all the official handles: