Many journalists have used Twitter for years to both source and distribute stories, but just how close is the connection between professional journalists and Twitter - and how useful is it, really?

@iSentia – Asia-Pacific’s leading media intelligence company – and the Media, Entertainment & Arts Alliance (@medialliance) got together to try and answer this question. We developed and distributed a survey to @medialliance member journalists in Australia with clear and specific questions about how and why they use Twitter. As the infographic below demonstrates, the results were compelling. 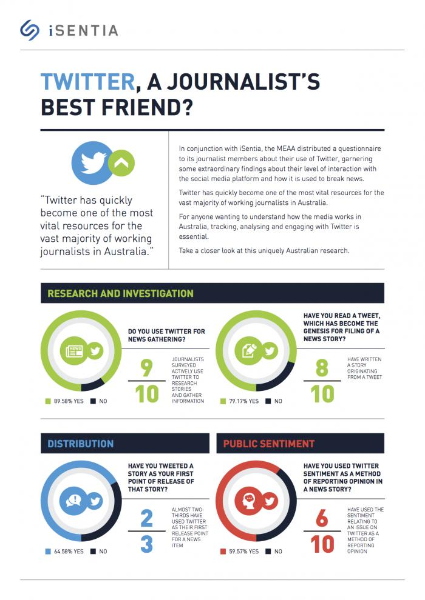 As can be seen by these extraordinary results, Twitter has for the vast majority of Australian journalists become an integral part of their working life for distributing and researching stories, as well as a powerful indicator of public mood on any given topic.

High-profile cases like the Tweeting of Osama bin Laden’s death or Barack Obama announcing his election victory are only the tip of the iceberg.

Twitter is breaking news, producing leads and feedback and providing insight for journalists every day of the year.

Anyone who ignores it as a vital part of the modern news stream is missing a huge part of the picture.