The XX Commonwealth Games drew to a close over the weekend following 12 days of competition which saw Aussie athletes haul home 137 medals, 49 of them gold.

With the world’s eyes firmly on Scotland as they hosted their largest ever multi-sport event, we got the chance to see 71 different nations and territories compete in 17 different sports. While the sporting contest took place in Glasgow, there was also plenty of Commonwealth Games action to enjoy on Twitter.

Here’s our roundup of how #Glasgow2014 unfolded on Twitter:

Aussies spark new Royal trend
As #Glasgow2014 played out in the stadium, members of the British Royal Family made several surprise appearances in athletes’ Twitter photos.

It all began when Australian hockey player @_JaydeTaylor had her selfie photobombed by HM Queen Elizabeth II. With almost 15,000 Retweets, it was the most retweeted message of the Games.

This Royal/Aussie photobombing was just the beginning of the craze though, as Princes William and Harry, as well as the Duchess of Cambridge, continued the trend with athletes from other countries:

…and take centre stage
We may have been pipped at the top of the medal tally by England, but as usual Aussies took the gold for stealing the limelight as this Tweet from @hockeyroos star @georgieparker shows teamate @GenGen_LaCaze dancing up a storm on stage as Kylie closed the Games Ceremony. 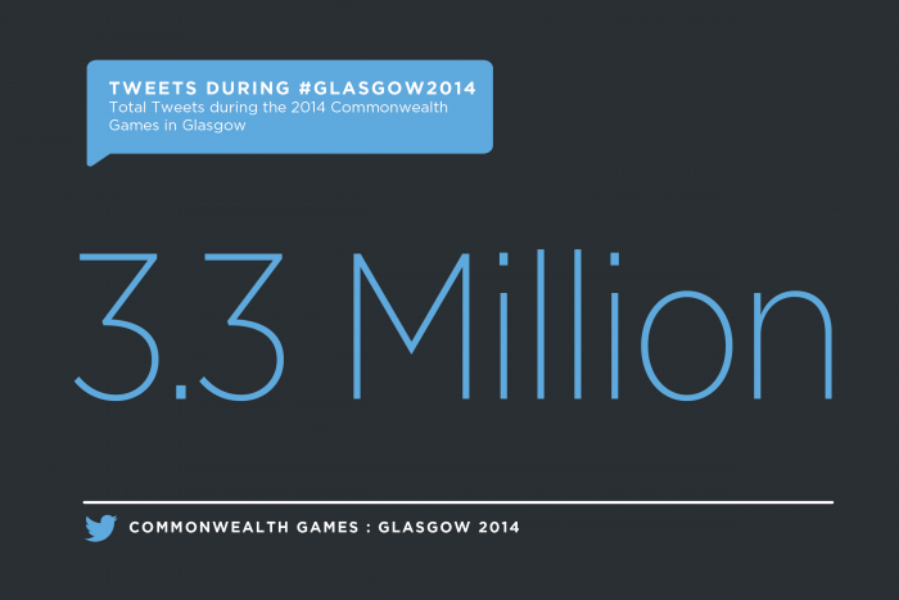 Our favourite Aussie Tweets
Here is our collection of some of the great Tweets that summarise the Australian story of #Glasgow2014:

The Bolt factor
Usain Bolt (@usainbolt) was the most-discussed athlete of the Games with more than 140,000 mentions.

Bolt also created the most-discussed sporting moment of #Glasgow2014 as he anchored Jamaica to a gold medal in the 4x100m relay.

The Jamaican used Twitter throughout the Games as a direct line into his fans, taking them behind the scenes and allowing them to feel part of those unique sporting moments:

360-degree perspective
Twitter became an extension of the action on the field, as competitors grasped the opportunity to engage directly with their fans. One new way of doing that was via the Vine 360 Booth, which had its UK debut based in the recreational area at the Athletes’ Village.

Competitors queued up to get involved and shot a series of six-second Vine clips, which were tweeted out from @TweetCam2014:

Behind the scenes
Aussie athletes involved in a range of sports loved sharing their Games experience with their Twitter followers:

Alternative perspectives
The @Glasgow2014 organisers put cameras in special vantage points, tweeting out some of the most compelling and unusual images of the Games:

Channel Ten and Optus Amplify the action
Throughout the Commonwealth Games, @channelten used Twitter Amplify with TV sponsor @Optus to distribute a series of engaging, timely and bite-sized video clips from #Glasgow2014 that helped them own the live conversation on Twitter around the competition.

So that’s goodbye to a fantastic #Glasgow2014 and only four years until the Commonwealth Games returns to Australia for @GC2018!