We’ve always known — as have many of our partners — that stars, writers, producers and even the official accounts for shows live-Tweeting an episode delights viewers. In fact, a U.S. survey of Twitter users has revealed that 66% said they like to see TV Tweets from official show accounts:

To investigate ways to measure the short-term and long-term benefits of live-Tweeting, we looked at two groups of like programs (for example, top dramas or reality shows) from the U.S. 2013-14 season: one that used regular live-Tweeting and one that did not. We then looked within each program to understand how episodes with live-Tweeting compared to their ‘baseline’ conversation levels on Twitter during episodes that did not feature live-Tweeting. With this data, we could assess the quantifiable impact of live-Tweeting during a broadcast window. Here’s what we found:

Live-Tweeting lifts the Twitter conversation
One frequent question we get asked from our partners is, “How can I increase the volume of Tweets about my program?” As it turns out, one of the most powerful and direct ways to drive conversation about a program on Twitter is to have the stars of the show engaged on Twitter, particularly during the airing. In fact, we found that shows live-Tweeting from cast members during the premiere had 64% more Tweets that day compared to programs that did nothing. Shows that live-Tweeted from the official handle also saw a 7% increase over those that did nothing.

In Australia, we’ve seen some great examples of live-Tweeting from shows like The Block and The X-Factor as these Tweets show:

Live-Tweeting lifts follower growth rate
Besides increasing the volume of Tweets about a show, live-Tweeting can contribute to building an audience on Twitter. When a program is on the air, there is a 6.5x lift in follow rate for the show’s official account when they don’t live-Tweet. When a show does live-Tweet, that increases 15%, to 7.5x. For a cast, their accounts go from a 3.7x lift in follow rate when they don’t live-Tweet to 12.2x — a 228% increase.

We also took a look at this trend by genre, and found that comedy series with a cast that live-Tweets had the biggest percentage increase. Across all genres, having a cast live-Tweet led to the biggest increase in follower growth (versus a show’s official handle). You can see the full results in the graphs below: 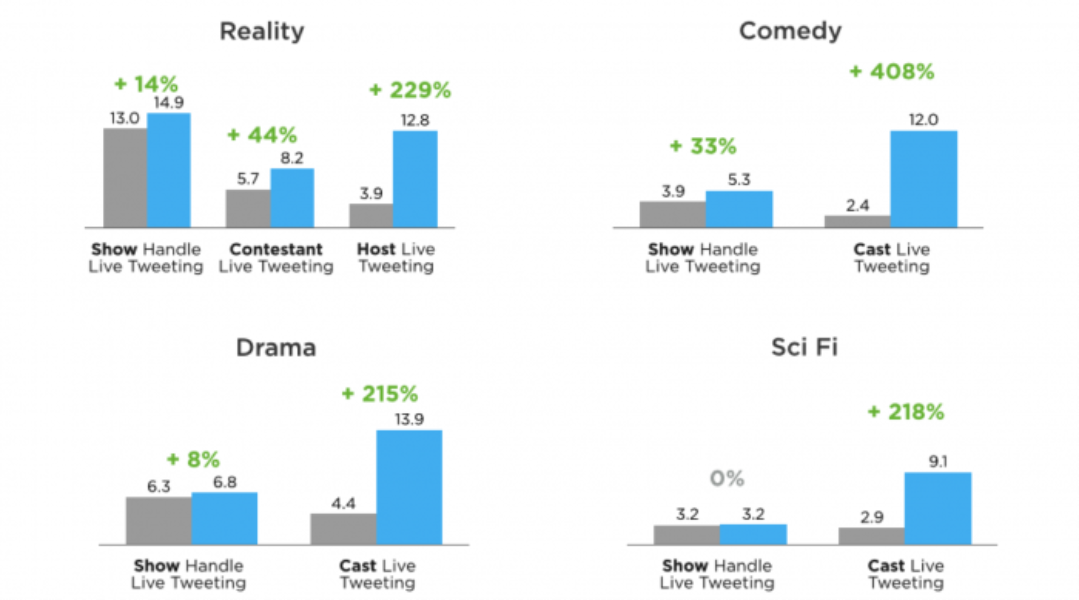 The key takeaway: In addition to being a way to engage with and delight your audience, live-Tweeting is an incredibly powerful way to drive conversation about your show — and build a lasting audience on Twitter with whom you can connect with year round. And the most direct way to make an impact through live-Tweeting is through the cast members. They’re your greatest asset.