#MKR sets a cracking pace for Must-Tweet TV in 2014

The official launch of the ratings season may still be a week away but we’ve already seen three of Australia’s most-tweeted-about TV shows — #MKR, #TheBlock and #BiggestLoserAU — go head-to-head not just on TV, but on Twitter.

During one week of unmissable reality television @Channel7, @Channel9 and @channelten all recognised the value of Twitter as the social soundtrack to television. To help drive tune-in, these networks and the show producers created a live public conversation around each show by promoting hashtags, integrating Tweets back into the broadcast and having talent live-tweet along to each episode.

With the three shows going head-to-head in the same primetime slot, it was no surprise that the first big topic of conversation among fans was trying to decide which reality blockbuster they should tune into.

One Tweet that may have swayed a few viewers towards #MKR surfaced from @Channel7, which gave fans an exclusive preview of the first three minutes of the season premiere before it went to air.

Because photos and videos are now more visual in your Twitter timeline, tweeting these to your followers is a great way to increase retweets and favorites. @TheBlock9 utilised this by creating engaging images that highlighted the most “BLOCKtastic” moments in each episode.

All three networks promoted their official show hashtags during key moments in each episode, a technique often referred to as finding the “TweetSpot”. This meant fans could curate the conversation around their favourite guilty pleasure, whether that be cookery, DIY or makeovers.

#MKR took this one step further by creating bespoke hashtags such as #TeamCheese, #FingerFive and #Twinning for each ‘Instant Restaurant’ team. Before long Twitter was awash with cheesey puns and plays on words as fans rallied around their favourite team.

Talent live-tweeting is always a great way for audiences to get even more insight into the drama unfolding within their favourite show. By encouraging the show’s stars to tweet behind-the-scenes gossip in real time, you’re creating a TV event that viewers are more likely to watch live.

#TheBlock did an excellent job by having all of its judges and contestants live-tweeting every episode while @manufeildel from #MKR and @mishbridges from #BiggestLoserAU also joined in.

One particularly important reveal you may have noticed @mishbridges teasing on Twitter was the reason for her absence in the first week. The @BiggestLoserAU account had been busy creating fan speculation ahead of broadcast by tweeting the #WhereIsMichelle hashtag. Fans caught on and the campaign culminated with viewers whipped into a frenzy for the big reveal the same night #MKR and #TheBlock launched.

Both #MKR and #TheBlock recognised the value of rewarding fans by integrating the funniest and most entertaining Tweets back into the broadcast. By showcasing audience Tweets on air, you reward them for tweeting along and promoting the show to non-viewers who may still tune-in. You also create an additional story layer for the broader audience to enjoy at home.

Each of the networks utilised Twitter in different ways and to different degrees to make TV even more fun and engaging for their audiences. But who tweeted it best? Over the course of the week we measured the Twitter conversation around each show and here’s how they measured up. 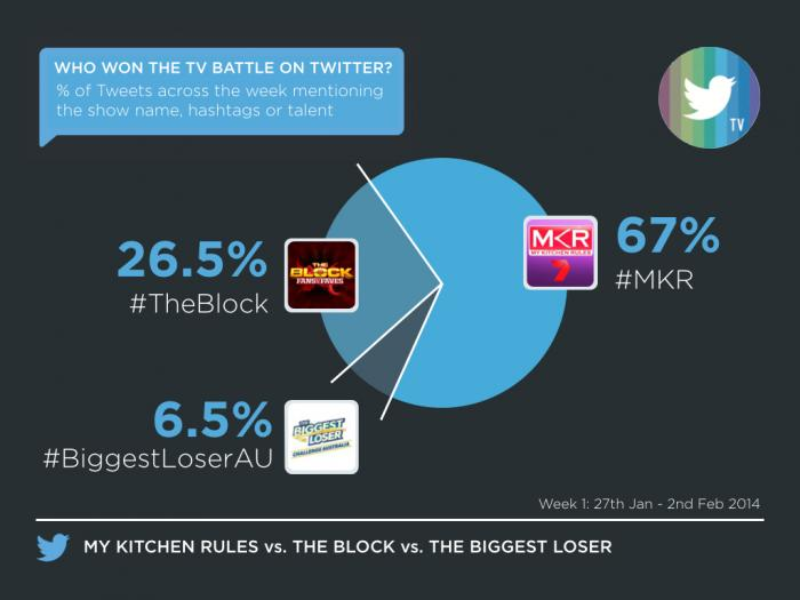 For anyone who has seen how the shows are rating these results may not be surprising as Nielsen now observes that “a spike in TV ratings can increase the volume of Tweets, and, conversely, a spike in Tweets can increase tune-in”.

When audiences see such a huge live, public conversation around one show over others it makes that program unmissable.

So when the overnight ratings came out after launch night there was only one place @Channel7 went to celebrate: on Twitter, of course.

While the first round goes to #MKR, we know that viewers’ TV-watching behaviour and Tweets change week to week as the stories unfold over the entire season. Who will be next week’s winners on Twitter? To continue the twists, turns and Tweets for #MKR, #TheBlock and #BiggestLoserAU, you can follow these accounts: