This year, people in Australia and across the world came together in moments of celebration, protest, mourning and joy. Many millions of you contributed to the moments and conversations that all unfolded on Twitter.

People send more than 500 million Tweets per day. Each one contributes something special to Twitter, but only one can be recognised as the “Golden Tweet,” a.k.a. the most-Retweeted Tweet of the year. No surprise that this year, the global honour goes to @TheEllenShow’s star-filled photo from the March Oscars telecast.

#YearOnTwitter in Australia
Australia, of course, has its own “Golden Tweet” which this year was Lorde’s Tweet* about a photo-shopped image of herself compared to the unaltered photo with a powerful message to her fans that “flaws are ok”.

Here are some more details of the #YearOnTwitter in Australia:

Top 10 peaks in Twitter conversations among Australians
Remembrance Day 2014 — marking the World War One centenary — saw the largest concentration of Tweets across the year locally – making this our number one fastest-rising conversation topic this year as many people observed and tweeted about the one minute’s silence at 11 a.m. on 11 Nov.

Politics continued to be a key discussion point, and as a nation of sport-lovers it is perhaps no surprise that half of the top ten peak moments were sport-related, while one of our most well-known exports, 5 Seconds of Summer (@5SOS) also featured twice in the top ten list. 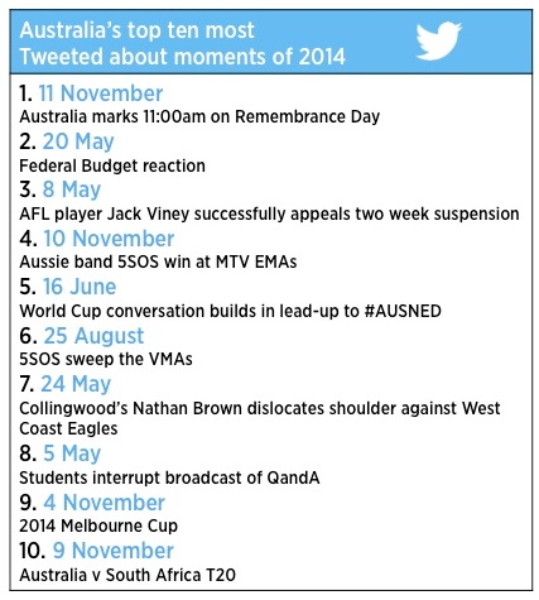 Top 15 most-Retweeted Tweets from Australian Twitter accounts
The impact of Phillip Hughes’ death on the nation is clear, with Tweets about the tragedy making up one third of the top 15 most retweeted Tweet list. View the list here**:

Top 10 fastest-rising Twitter hashtag trends in Australia
Australians use Twitter to discuss and follow passion points, with the main ones reflected in the highest trending hashtags locally in 2014, including politics, news, sport and television. 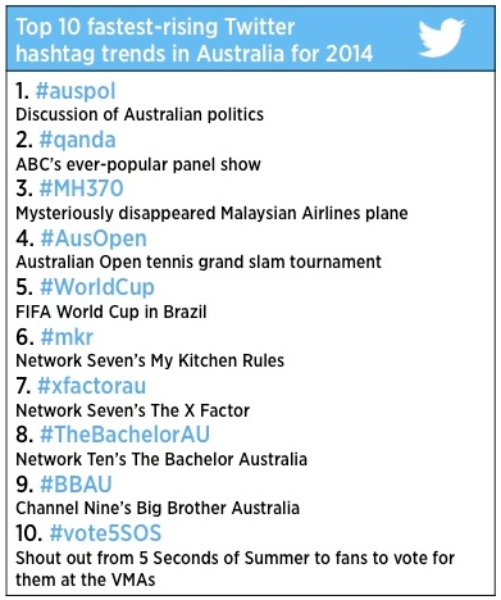 Most followed and fastest growing Australian Twitter accounts
When it comes to the most followed Australians on Twitter, our many world famous entertainment superstars dominate, with each of them using Twitter to give their massive global fan bases greater insider access. 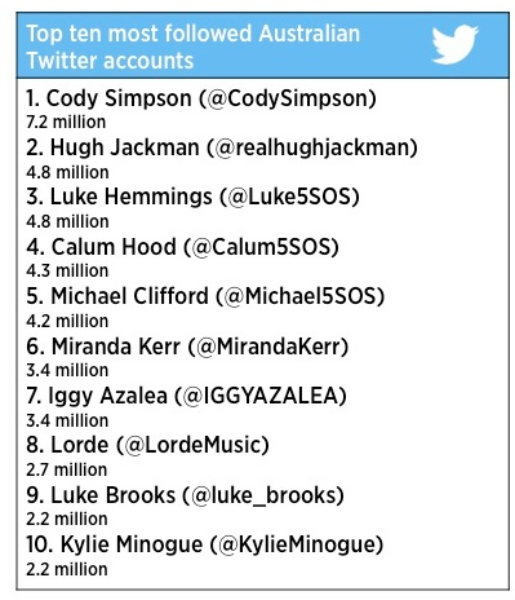 2014 also saw a number of new local stars burst onto the scene, both here in Australia and abroad, and mirroring this, their Twitter growth was huge! 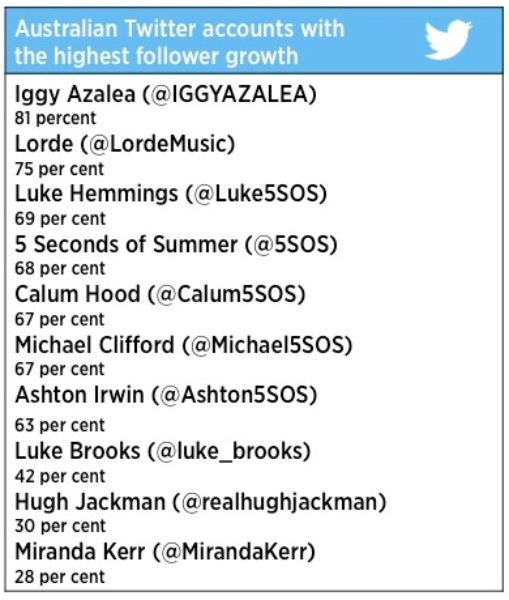 Every year, there are thousands of what we call “Only on Twitter” moments - things that demonstrate the power of the platform and could have only happened because of Twitter. Here’s three from 2014:

@Tim_Cahill tweets his reaction to Germany’s thrashing of Brazil at the World Cup, sparking a new craze - #Cahilling.

Twitter users come together to celebrate the life of Aussie cricketer Phil Hughes, with the moving tribute #putoutyourbats.

2014.Twitter.com also showcases the year from the perspective of some of your favourite (and most prolific) Twitter users. The list of featured users is below. From the site, you can also explore their #5toFollow to see their own must-follows.

Finally, while Ellen’s and Lorde’s Tweets are the most “Golden” internationally and locally, there are countless others we won’t soon forget. Here are a few you might appreciate:

*We know Lorde is from New Zealand, but in true Australian fashion we’re claiming her!
**In the interests of variety, we’ve excluded Retweets of the boys from @5SOS - and there were a few! Here’s their top 20 Retweets: