#Sochi2014 has come to a close after two weeks of world class competition, from a wide variety of athletes around the globe. Thanks to Twitter, fans at home have been closer to the action than ever before.

We’ve been transported to Sochi by Aussie athletes who have taken to Twitter to share their Olympic experiences. We’ve been there with them through the highs and the lows, and have been provided an exclusive insight into life as an elite athlete competing at an Olympic Games.

Once again the Aussies hit above-their-weight when it came to winter sporting success, winning three medals at #Sochi2014:

All three medalists, @TorahBright, @LydiaLassila and @AerialSkier, shared their winning feeling with fans around the world via Twitter:

It was not only our medal winners who provided amazing insider access to life at the Games. 75% of @AusOlympicTeam athletes competing at Sochi are on Twitter and they kept fans in Australia up to date on their experiences:

Not only did the Aussies provide great insight during the Games, speed skater @DanielGreig went one better and live tweeted his experience of the closing ceremony:

It seems that Australian’s loved tweeting along with the athletes, while celebrating their amazing performances and discovering what it was like in Sochi. Here are the most mentioned Australian athletes competing at #Sochi2014 on Twitter: 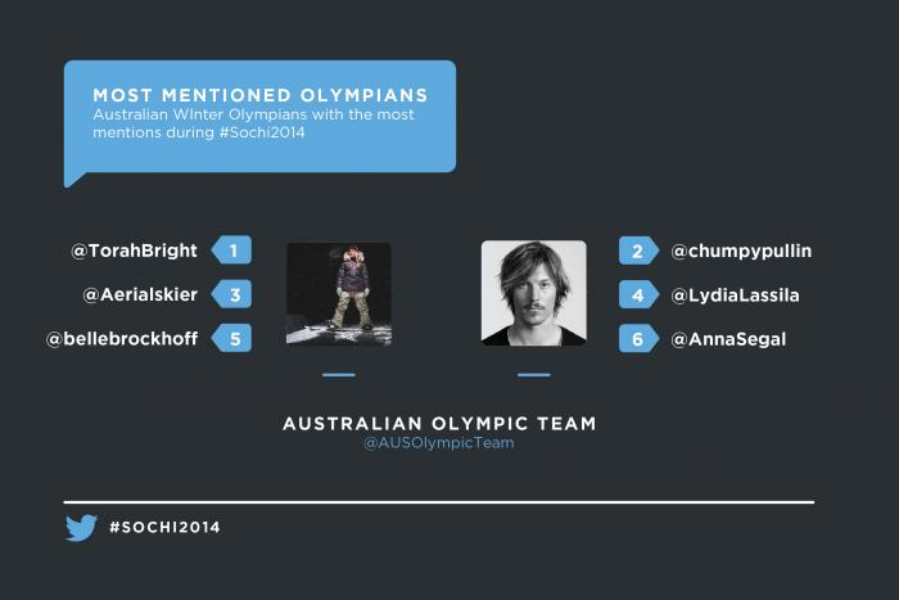 The most comprehensive coverage of Australian athletes was provided by @AusOlympicTeam. They provided a vast array of photos, videos, news, stats and updates throughout the Games and were able to keep Aussies at home up-to-date on everything that was happening with our athletes in Sochi.

Not only did @AusOlympicTeam provide the best coverage of what was happening from an athlete point of view, they sent the Boxing Kangaroo to showcase life in Sochi in a series of #BKinSochi escapades:

From a global perspective, these were the most-mentioned sports on Twitter during the Games:
Ice Hockey
Curling
Figure Skating
Bobsled
Snowboard

Here are the moments of competition that generated the biggest peaks of Twitter conversation (measured in Tweets per minute, or TPM) during the Games: 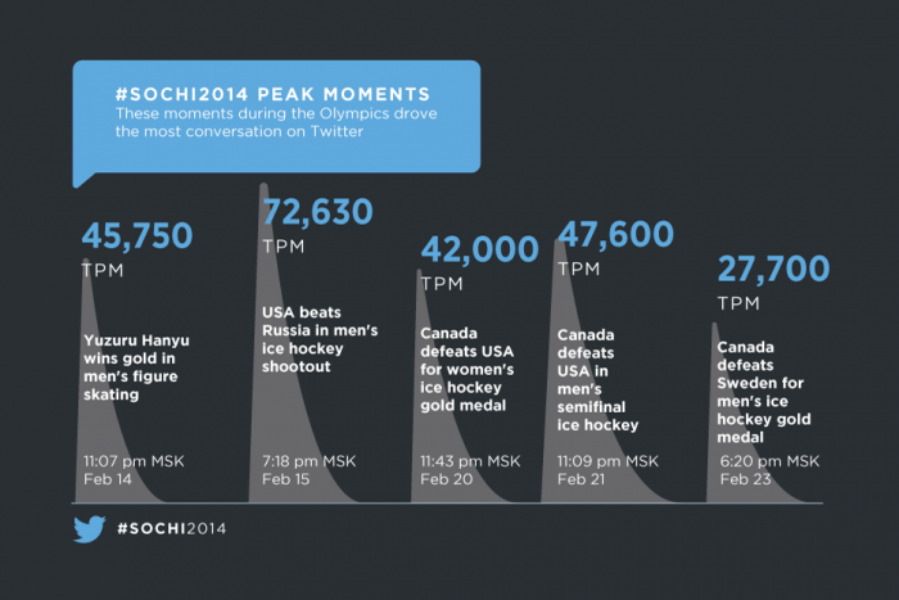 Each day of #Sochi2014, millions of real-time images were shared across Twitter. This photo grid, created by our visualization scientist Nicolas Belmonte, shows a selection of the most-shared images on Twitter each day of competition.

It’s been great to see another global sporting event unfold on Twitter. We now look towards the #AusGP in Melbourne, #WorldCup in Brazil and the #Glasgow2014 Commonwealth Games.