Throughout 2014, we saw Twitter used to celebrate World Cup victories, inspire political activism, and explore the universe. The last night of 2014 was no different, with many of us taking to Twitter to share our New Year’s Eve celebrations, a look back at the year past or wishes for 2015.

One of the highlights of this was in Sydney — home of one of the most spectacular New Year’s fireworks displays in the world — where Twitter users had their inspirational Tweets for 2015 projected on the pylons of the iconic Sydney Harbour Bridge.

In the lead up to the big night, @cityofsydney helped revellers with ‘vantage point’ Tweets that cleverly illustrated where the best vantage points were for families to watch the fireworks. @cityofsydney also used the night as a priceless opportunity to promote Sydney to international tourists.

Throughout the night, @Telstra also used Twitter’s @SnappyTV to Tweet highlights of the fireworks and their NYE party.

Of course, Sydney wasn’t alone in putting on a special show:

Many of Twitter’s most famous faces also took to the platform to give us a behind the scenes peek into how they were ringing in the new year.

Tweets offer an insight into resolutions
As the calendar turned to a new year, we took a look at top Tweets about New Year’s resolutions to get a sense of which forms of self-improvement take priority. Based on a ranking of (English-only) keywords associated with resolutions since 25 December, here are the top aspirations and intentions you’re collectively sharing on Twitter: 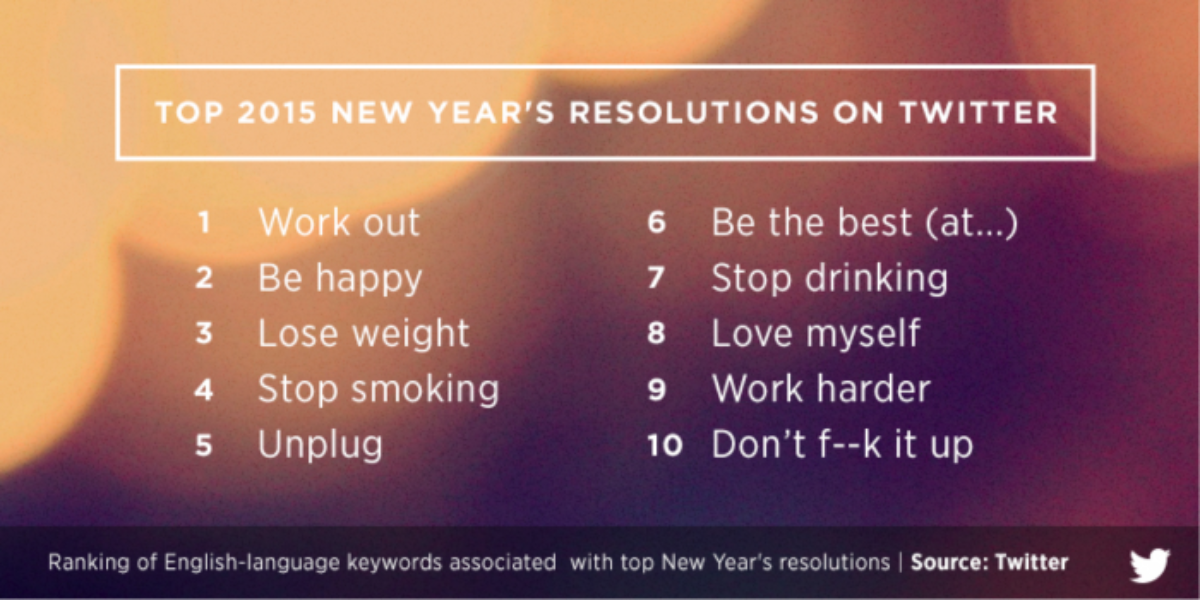 Finally, here’s a few of Australia’s own resolutions for the coming year. Our best to you and yours for 2015!