The Aussies got #CWC15 off to the best possible start last night as @CricketAus defeated @ECB_cricket by 111 runs in front of nearly 85,000 fans the @MCG. Here’s a closer look at how #AUSvENG played out on Twitter.

@AaronFinch5 was the star among many high performers, smashing a brilliant 135 runs in his 128 balls innings. @AaronFinch5 took out the man of the match award for his performance and stopped by a Twitter Mirror to show off his prize.

Not surprisingly, @AaronFinch5’s knock sparked plenty of admiring conversation on Twitter, making him the most mentioned player from either side. These were the most-mentioned @CricketAus players on Twitter during #AUSvENG:

Here are the moments that generated the biggest peaks of Twitter conversation, measured in Tweets per minute, during #AUSvENG: 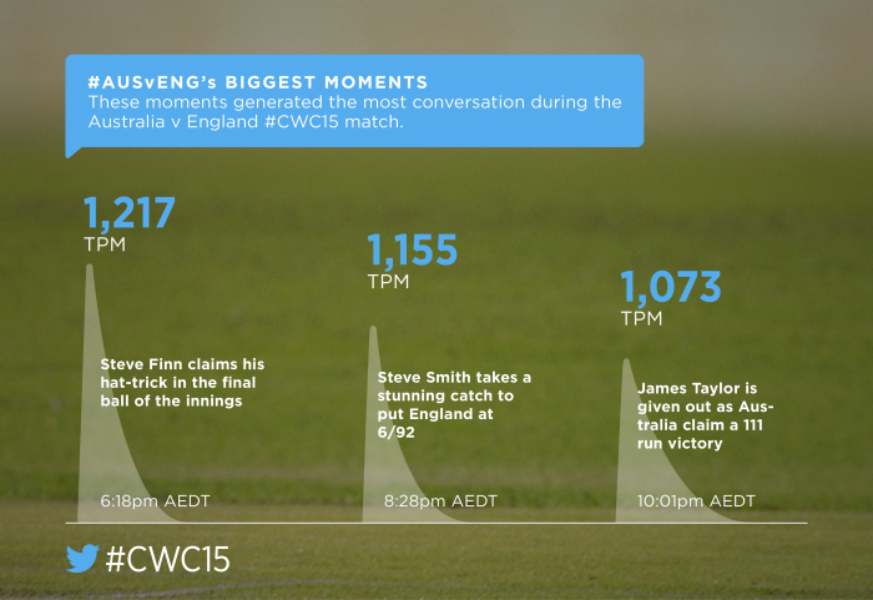 As usual for the big events it was a busy night on Twitter. Relive the victory with this collection of some of our favourite Tweets from #AUSvENG:

So after a resounding victory over the old enemy for @CricketAus, it’s minnows Bangladesh (@BCBtigers) up next on Saturday 21 February. Be sure to hit Twitter for all the #AUSvBAN action and all the other excitement from #CWC15. And while you’re watching, don’t forget to check out our special Cricket World Cup timeline to help you get closer to the action that ever before.