Today, as part of our continued efforts to combat abuse, we’re updating the Twitter Rules to clarify what we consider to be abusive behaviour and hateful conduct. The updated language emphasizes that Twitter will not tolerate behavior intended to harass, intimidate, or use fear to silence another user’s voice. As always, we embrace and encourage diverse opinions and beliefs –but we will continue to take action on accounts that cross the line into abuse.

Over the past year, we’ve taken several steps to fight abuse in order to protect freedom of expression: We’ve empowered users with tools for blocking, muting, and reporting abusive behaviour, and evolved our policy to capture more types of abusive behaviour. We’ve also increased our investment in policy enforcement so that we can handle more reports with greater efficiency, and bolstered educational resources through a new Twitter Safety Centre.

One of the areas we’ve found to be effective in this multi-layered strategy of fighting abuse is creating mandatory actions for suspected abusive behavior, such as email and phone verification, and user deletion of Tweets for violations. These measures curb abusive behaviour by helping the community understand what is acceptable on our platform. 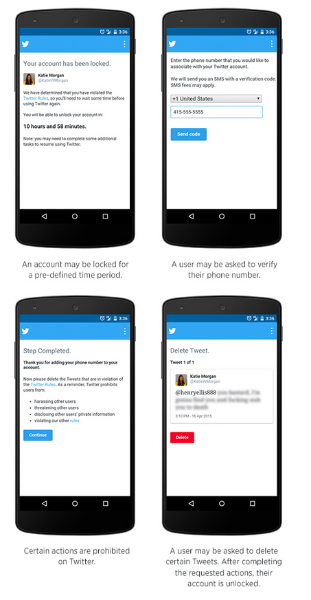