By
Wednesday, 27 May 2015
Link copied successfully

One of the biggest rivalries in Australian sport doing battle in front of a huge TV audience and close to the busiest night of the year on Twitter in Australia? Yep, #Origin is back with a bang for 2015!

Australia’s two biggest rugby league rivals will clash in a massive #Origin Game 1 at @ANZStadium tonight. Who will win to take a 1-0 lead a big step towards getting to send the sweetest Tweet of all - @NSWRL or @QLDMaroons?

In the lead up to the series opener, both teams have been providing fans behind the scenes access on Twitter. The NSW Blues sharing pics from the air, the ground and with crazy hair.

While, the QLD Maroons have been in the lounge, the bus and on the track.

The official @NRL account will be pumping out amazing photos, video and stats throughout the series, including custom animations, Twitter votes, infographics and all sorts of historical highlights. You may even be able to chat to your favourite legends as they run Twitter Takeovers.

The @TwitterAU team have been devouring the news, inhaling the stats and Retweeting the Tweets to ensure we’re all set for Wednesday night. As part of this, we’ve developed our “Tweet of Origin” team based on the most mentioned players. Here’s what we came up with: we reckon it’s a fair old line-up! 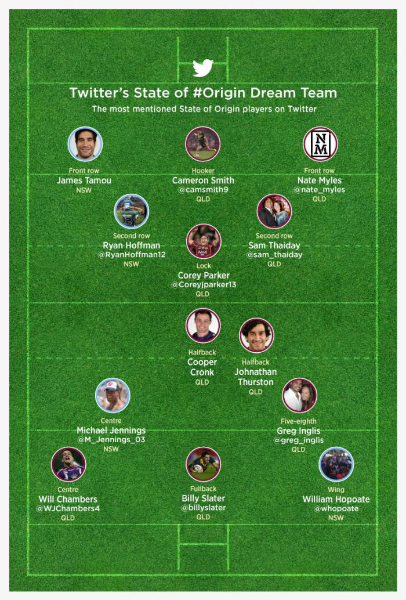 Keep up to date with all the latest news and updates before, during and after the first State of Origin game, make sure you are following all the official accounts:

To help you get even closer to the Origin players, check out our lists of who you can follow from rugby league’s greatest State vs State battle: