Get set for the @ALeague Grand Final on Twitter

This Sunday, Australia’s two biggest @ALeague clubs will clash in a massive Grand Final. With @AAMIPark hoisting the “sold out” sign, fans will flock to Twitter to get closer to the action.

Melbourne Victory (@gomvfc) will host the showpiece of what has been another top draw @ALeague season, when @SydneyFC come to town for what might be the biggest #BigBlue battle yet. Who will emerge with bragging rights and get to send the sweetest Tweet of all?

In the lead up to the Grand Final, both teams have been providing fans behind the scenes access from the training pitch:

To fire up already passionate fan bases, @SydneyFC and @gomvfc have been reminding fans of heroic moments from this and previous seasons.

In Grand Final week, fans have had the opportunity to chat directly with their heroes during live Twitter Q&As:

The role of the fans has been a major focus for the A-League this season, and the #ALeagueGF is no exception. For the first time in Australian sport, fans will be able to vote for the Man of the Match of a Grand Final on Twitter.

@HyundaiAus and the @FFA are giving the fans one of the nine votes on the panel of experts for the prestigious Joe Marston Medallist, which celebrates the player of the match in the Grand Final.

Fans will be invited to vote for the Joe Marston Medal winner on Twitter using the hashtags #HyundaiGFvote and #playersurname (e.g., #Berisha or #Janko).

Fans will also get exclusive access to instant replays on Twitter, with the A-League Tweeting video highlights seconds they take place on the park. Here’s a look at a few from the sem-finals:

Given it’s been such an exciting @ALeague season, we’ve scoured all of the comments, chants, rants, goals, saves and moments of #individualbrilliance you’ve shared via Twitter to name our very own 2014/15 A-League XI based on player mentions.

Here’s our team of the most-mentioned players on Twitter, in position and ready to take on any team in the country. 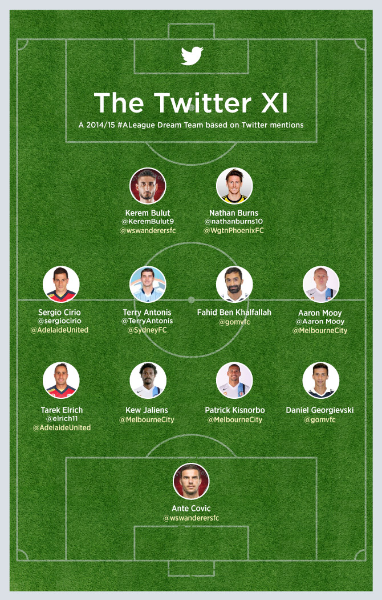 As well as the most-mentioned players over the course of the season, we’ve also compiled a list of the top five teams ranked by mentions:

We’ve also looked at the most mentioned coaches, with the list topped by the men in charge of the grand finalists:

So it’s time to sit back and enjoy all things #ALeagueGF. If you aren’t lucky enough to be at the match in Melbourne, the next best thing is to follow all of the action on Twitter alongside Fox Sports and SBS.

Follow the teams (@gomvfc and @sydneyfc), the league (@ALeague), the broadcasters (@TheWorldGame and @FoxFootball), as well as a small selection of fan accounts.