The 2015 #Origin — the @NRL’s global showpiece — has been played in three of the countries biggest stadiums, with massive TV audiences and fans flocking to Twitter to share their passion.

This year also marked the first time you could watch Origin on Twitter, and not just the conversation around it. Rugby league fans were treated to instant replays in real time. Channel 9 provided highlight clips via @WWOS9 and they were shared across Twitter to hundreds of thousands of footy fans:

Nielsen’s Twitter TV Ratings (NTTR) data provides a snapshot of how the Origin series played out on Twitter in Australia.

Here’s a look at the most moments in each game and across the series according to @NielsenSocialAus. 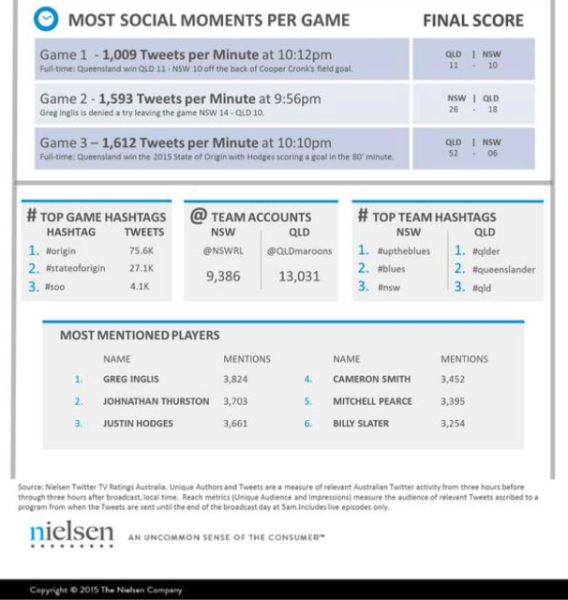 @NRL distributed a vast range of content across their official Twitter handles from Mission Control, their social media war room.

Graphic designers working from inside Mission Control had some fun reacting to the live action on Twitter.

The @NRL also gave fans the opportunity to win a signed match ball, simply by Tweeting a picture and including #Origin.

Fans were also able to win tickets via Twitter ticket hunts. It was a great way to give their loyal and passionate followers an opportunity to witness the game in person.

Access to players is always hard during #Origin, but the @NRL was able to arrange a few Twitter takeovers and Q&As with players and NRL legends in the lead-up to each game.

Fans from around the world took to Twitter during #Origin to share the highs, lows and everything in between. Twitter provides an opportunity for anyone to have a voice, talk to people with similar interest and essentially make their sporting experience better.

Here’s a selection of some of the great Tweets from across the #Origin series:

The 2015 #Origin series paves the way for an intriguing end to the NRL season, culminating in the Grand Final on October 4th. Don’t miss a thing by following your favourite teams, players and of course the official @NRL account.