Introducing autoplay video and a new standard for viewability

Today we’re introducing a more streamlined consumption experience for all native videos, GIFs and Vines on Twitter. These rich media creatives will now autoplay in timelines and across Twitter. We have begun rolling out this change to iOS and web, with Android coming soon. 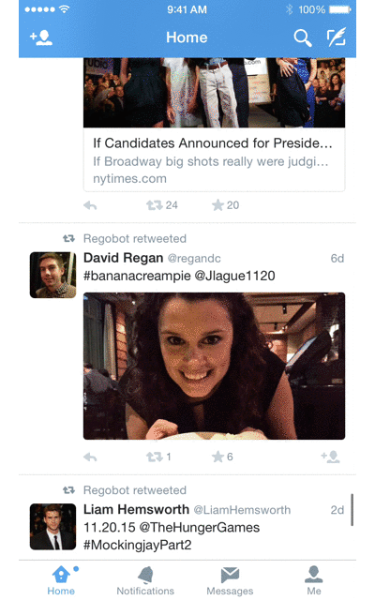 When a user scrolls through his/her Twitter timeline and sees a video, that content will begin to automatically play while muted. Clicking on the video will bring the user into the full-screen viewer with sound and continue playing. As always, people can Retweet, favourite or comment on the video at any point. To keep the rich media experience consistent, seamless and friction-free, this also applies to GIFs and Vines shared on Twitter.

Also starting today, videos will appear in a larger, more media-centric format in timelines. During the autoplay tests we ran, we saw people engaging with videos in this new format at a much higher rate, and our brand and publishing partners saw improved view rates. All of this resulted in lower cost-per-views for marketers and increased video recall by consumers.

Promoting quality and trust: A new standard for video viewability
As with all of our ad products, we’ve made sure that Promoted Videos on Twitter will continue to deliver high impact, high engagement and meaningful views for our advertising partners. To that end, we’re approaching how we measure, report and charge for video views with complete transparency.

We’re delivering on a new standard for how brands will be charged for a video view. Starting today we’ll only consider a view on Twitter chargeable when a video is 100% in-view on the user’s device, and has been watched for at least three seconds. We’re putting this standard of 100% viewability in place because we think it’s simply the right thing to do. If a video is not 100% in-view, we don’t think an advertiser should be charged.

“Viewability is one of the key drivers that make or break the effectiveness and ROI of any campaign, and we need to partner with platforms who understand this. Twitter continues to bring stronger value and deeper user engagement to their platform, and the evolution of its video product is a win/win for brands and the Twitter user experience.” – Ron Amram, Senior Media Director, Heineken USA

Further, we’ll soon be working with multiple third-party verification vendors to give advertisers confidence that their Promoted Video content is reaching the right viewer with the right message. This is especially important when it comes to mobile video measurement. Twitter is in active discussions with both Nielsen and Moat to provide third-party verification of the metrics of Promoted Video campaigns to ensure our partners have complete transparency around the effectiveness of their marketing efforts on Twitter.

We’ve done a lot to make discovering and watching videos on Twitter better for consumers and brands alike. By introducing autoplay and taking a stance on viewability, we think Twitter is now the premier platform for marketers to share and distribute the best video content in the world.

To learn more about the video opportunity on Twitter, visit video.twitter.com/about.