Ten tips from the TV #YearOnTwitter

Once again, TV has been at the heart of Australia’s #YearOnTwitter with three massive TV events — #QandA, #MKR, and #Eurovision — dominating the local fastest-rising Twitter hashtag trends. In fact, if you look across the top 10, you’ll notice nearly all these events are televised, whether it’s breaking news or a big sports final. 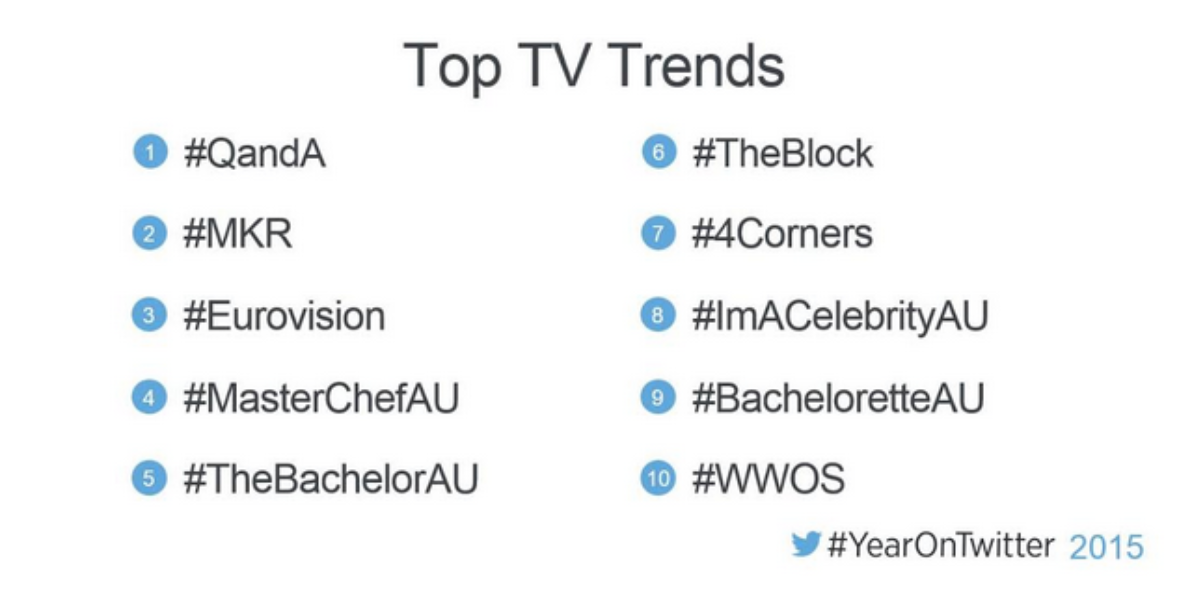 As part of our #YearOnTwitter analysis, we took a deep dive into the top 10 trending Australian TV shows. Regardless of the show, network, or genre, the conversation around our favourite TV continues to grow with shows like #QandA, #MKR, and #TheBlock continuing to dominate and new high-risers such as #ImACelebrityAU, #4Corners and #BacheloretteAU.

So how did they do it?

We’ve examined the top 10 TV shows and want to share best practices each one is doing to help make them successful:

10. Wide World of Sports (#WWOS)
Tweet stats and trivia from your show in graphic format to create instant shareable content for fans.

9. The Bachelorette (#BacheloretteAU)
Ensure you make the most of your finale moments by having exclusive video from the shows stars that recaps what’s happened since the series finished recording.

8. I’m A Celebrity… (#ImACelebrityAU)
Introduce real-time Twitter voting to allow celebrities and influencers to rally support around their favourite contestant.

7. Four Corners (#4Corners)
Tweet graphics of pull quotes from your show to emphasise the biggest talking points from the episode in a format that is instantly shareable.

6. The Block (#TheBlock)
Don’t just broadcast, engage with your audience! Encourage discussion by asking your audience questions as they live-Tweet your show.

5. The Bachelor (#BachelorAU)
Have your cast host Periscope Q&As during broadcast to bring a live feel to pre-recorded shows such as @OsherGunsberg’s #OsherScopes.

4. MasterChef (#MasterChefAU)
Don’t lock down reality contestants — give them the tools and processes to engage with fans! Whether that be via an official account takeover or their own live-Tweeting.

3. Eurovision (#SBSEurovision)
Remember that Twitter is visual! Ask fans to Tweet in photos and videos of how they’re enjoying your show.

2. My Kitchen Rules (#MKR)
Turn your audience into fanbases by creating catching team hashtags for viewers to adopt when talking about their favourite contestants.

1. Q&A (#QandA)
Don’t just switch your account on and off during broadcast. Extend your distinct voice across the week by sharing interesting, relevant content.

For the latest on all your #MustTweetTV make sure you’re following @TwitterTVAU.