The tension and Tweets of the Trans-Tasman tussle

It wasn’t the run-fest many predicted, but the #CWC15 Trans-Tasman grudge match had drama galore: batting collapses, five-fors, a near great escape and finally, a six to finish it as hosts New Zealand (@BLACKCAPS) recorded a one wicket victory over Australia (@CricketAUS).

Before, during and after the match, our special Cricket World Cup timeline, accessible via a Twitter search for #CWC15, the official match hashtags or by visiting twitter.com/i/cricket, brought to life the #AUSvNZ match for Twitter users as their one stop for Tweets, commentary and expert analysis, plus photos and videos. Here’s how #AUSvNZ played out on Twitter.

Ball certainly dominated bat at Eden Park so it was only fitting that New Zealand’s @trent_boult picked up the man of the match award for his brilliant 5/27. And as he fronted up for the now customary Twitter Mirror, @trent_boult was more than happy to share the moment with the celebrating crowd behind him.


Post-match, Twitter took you behind the scenes for the @BLACKCAPS’ celebrations, including an interview with the man who hit the winning six, Kane Williamson.

With such a tension filled match, cricket fans took to Twitter to discuss every exciting moment and twist and turn as first @CricketAUS battled to 151 all out and then @blackcaps collapsed in the thrilling conclusion. This resulted in an extraordinary 26 million Tweets impressions in the live match window, once again reaffirming Twitter’s status as the second screen for live sport.

In an incident packed match, these were the moments that sparked the biggest peaks in Twitter conversation during #AUSvNZ. 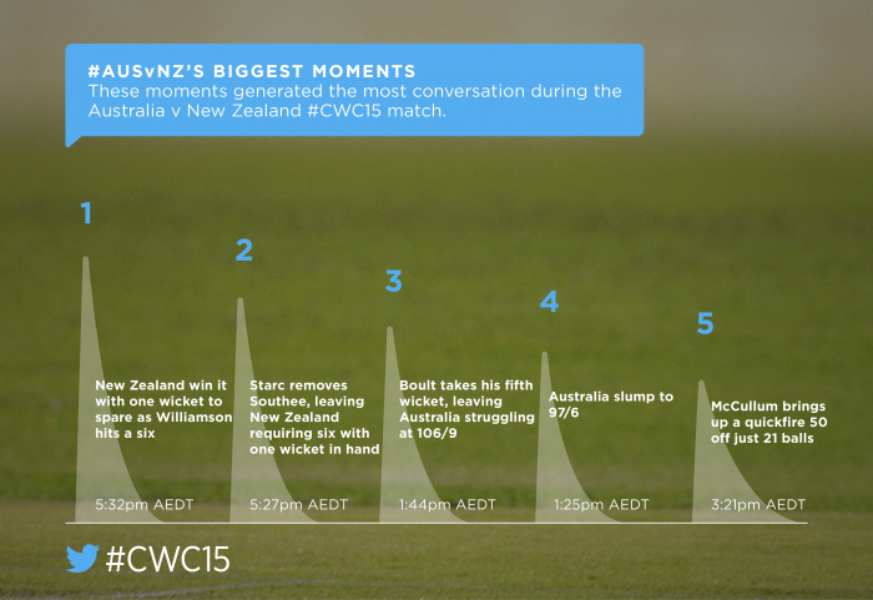 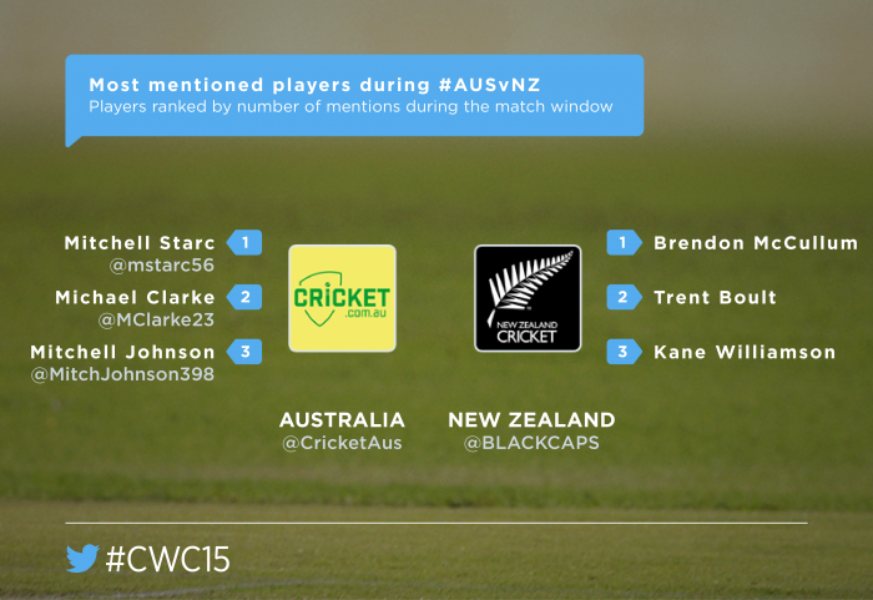 As one of the most exciting matches of what has already been an amazing #CWC15, Twitter lit up as the match ebbed and flowed. Here’s some of our favourite Tweets from #AUSvNZ.

Finally, our special Cricket World Cup timeline, accessible via a Twitter search for #CWC15, the official match hashtags or by visiting twitter.com/i/cricket, brought to life the #AUSvNZ match for Twitter users as their one stop for Tweets, commentary and expert analysis, plus photos and videos before, during and after the match. Be sure to check it out for the latest news throughout the tournament and during each match.

Next up for @CricketAUS is minnows Afghanistan (@ACBofficials) and a good chance to get back to winning ways in Perth, while @BLACKCAPS continue their drive for top place in the group against the same opponent next weekend in Napier. Be sure to stay explore our special Cricket World Cup timeline for the latest news from the build up and match action from these games and throughout the tournament.