.@TheVoiceAU: the first Aussie TV show to be a hit across Twitter, Vine, and Periscope

This season, #TheVoiceAU has become the first Australian TV show to fully embrace the combined power of Twitter, Vine, and Periscope to bring fans even closer to their favourite coaches and artists. The audience has flocked to all three platforms making it one of the highest-rating shows on the Nielsen Twitter TV Ratings (NTTR) and a social sensation. Here’s how.

Twitter
Twitter has always been an integral part of #TheVoiceAU format — both in Australia and around the globe — but this year @TheVoiceAU took it to another level, helping it become the number one non-sports show on the NTTR every night during the live phase of the series.

One example of #TheVoiceAU’s top Twitter game was using the platform to announce the next superstar act to perform on the series, Tweeting these announcements in the moment to capitalise on the huge reach Twitter can give through its vast network of TV and music fans.

In the last year we’ve seen photos and video take centre stage on Twitter and @TheVoiceAU has fully embraced this with their slick Twitter Mirror integration, as well as embracing Twitter video for maximum engagement.

And of course, Twitter is the ideal platform to have a direct conversation with the talent from your favourite show. To celebrate the build-up to the Grand Final, the top four artists have taken part in a series of Twitter Q&As across the week.

If asking questions wasn’t enough, you could even use Twitter to get the coaches to complete challenges for you by Tweeting them during the live show (in return for votes for their team of course!).

Vine
Vine is a mobile entertainment network where you can search for looping videos, follow people, or browse channels such as animals, comedy, OMG, or “popular now”. It’s seamlessly integrated into Twitter but has a fast-growing community in its own right which is very popular with a younger demographic in Australia.

Understanding the importance of, this @TheVoiceAU fully embraced Vine this year by producing creative stop-start animations that highlighted some of the most exciting moments of the series whether that be a special message from @EdSheeran to @DeltaGoodem or upcoming performances between the coaches and their team.

We’ve also been treated to behind-the-scenes looks at the artists’ fashion courtesy of a Vine 360 Booth, and even a magic trick with @Ricky_Martin.

Periscope
The hosts, coaches and artists have also enthusiastically embraced Periscope during the live shows to take fans everywhere from backstage to the studio floor and even in the coaches spinning chairs. If you haven’t already, download Periscope on iOS or Android and look out for the notifications and Twitter updates from @TheVoiceAU to get a second-screen experience to the live finale.

With the grand final just days away, the question on everyone’s lips is who will win? This year @TheVoiceAU has generated huge conversation by encouraging fans to Tweet with their favourite team hashtag and with only three coaches still in the running — #TeamJessie, #TeamMadden and #TeamRicky — we crunched the numbers to find out which team has had the most buzz on Twitter this season. 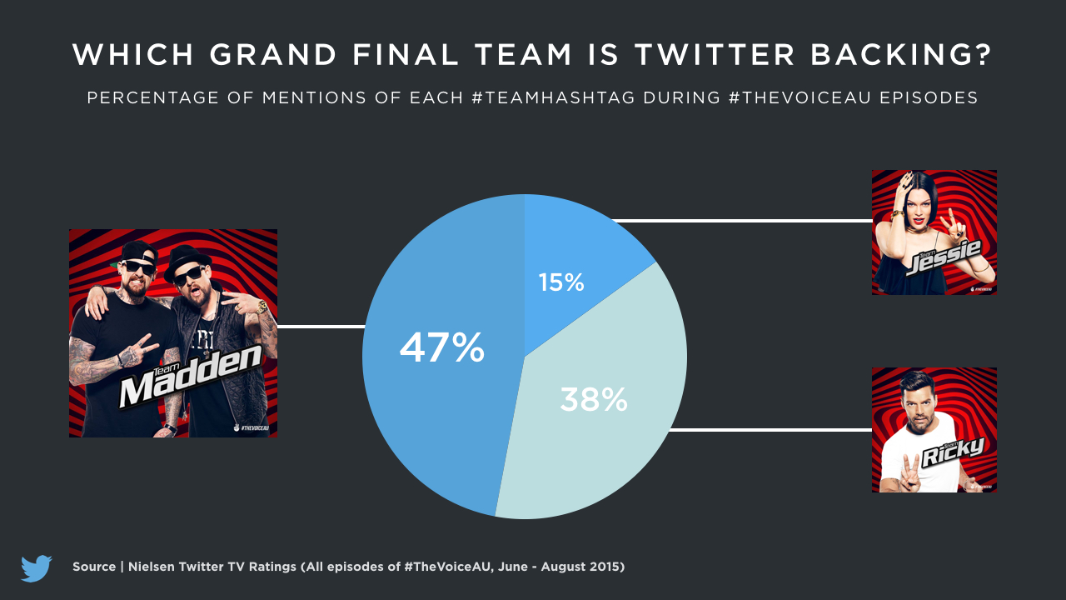 At first glance #TeamMadden looks to be in the lead with 47% of team mentions however with Joel and Benji taking two artists into the final and #TeamRicky only featuring one does that mean Ricky could be walking away as this year’s winner?

Tune in to @TheVoiceAU on @Channel9 this Sunday to find out and live-Tweet your prediction with the hashtag #VoiceFinale!