As always, Australia and the rest of the world united this year in moments of triumph, activism, support, and fascination — and Twitter is where we gathered for all of it. Whether people were making a hashtag into a global movement or expressing wonder over a photo of a dress, we all used Twitter this year in awe-inspiring ways.

#YearOnTwitter in Australia
Whether celebrating iconic sporting moments, tracking a tumultuous political cycle or talking about our favourite TV shows, 2015 saw Australians engage with the world on Twitter in new, exciting and memorable ways.

Australia’s Golden Tweet of 2015 (the most-Retweeted Tweet from an Australian) was by Michael Clifford (@Michael5SOS) from supergroup @5SOS when he Tweeted a photo of his bandaged face after walking into a pyrotechnics display during a gig in London. It captured 162,497 Retweets.

Here are some more details of the year:

Top 10 fastest-rising Twitter hashtag trends
Australians use Twitter to discuss and follow their passions, with the main ones reflected in the highest trending hashtags, including politics, news, sport, television, and social movements.

From #auspol’s big moment #LibSpill, hosting #CWC15, to Australia’s first appearance at #Eurovision, Twitter was the place to follow the trends that interested Aussies the most. Here’s a look at some of the most-Retweeted Tweets from each of these top trends.

Most-followed Australian accounts
When it comes to Twitter’s most-followed Australians, our many world famous entertainment superstars dominate, each of them offering their massive global fan bases inside access. New entrants to the list this year include @shanewarne, @rebelwilson and @troyesivan. Troye had a massive year, with Tweets shoutouts from @Adele and @TaylorSwift13! 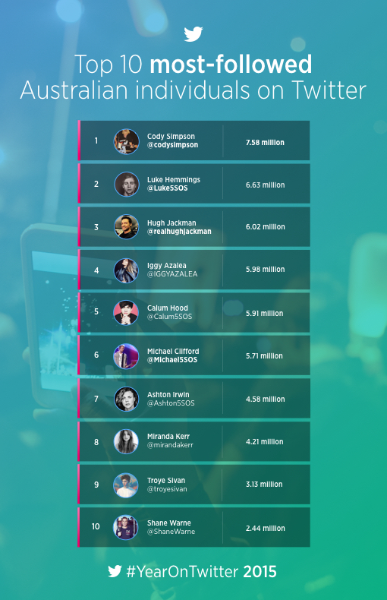 Here’s a closer look at our #YearOnTwitter, including the Golden Tweet, the most influential moments, the most popular hashtag trends, innovations and most followed accounts to show how 2015 unfolded down under on Twitter.

Today, thanks to our partners at @GettyImages, we’ve also unveiled the global #YearOnTwitter at 2015.Twitter.com so you can look back at the most-Retweeted Tweets, the most popular trends (and emojis!), and how 2015 unfolded across the world.