We are excited to announce we’re beginning to test the Promoted Tweet Carousel, a new ad unit that gives marketers a rich canvas for brand storytelling using their own Tweets or Tweets about their brand by users who have given permission to the brand.

Advertisers have told us that creating compelling, engaging content can be both expensive and time consuming. We also know that driving word of mouth marketing is critical as marketers want to develop an authentic relationship with customers. Since people Tweet about their favourite brands and products every day, we developed this powerful solution to help marketers leverage social recommendations.

The new Promoted Tweet Carousel allows advertisers to curate multiple Tweets within a single swipeable ad unit to tell a rich and compelling story. Advertisers can leverage Tweets with videos, images, or text from their own Twitter account. Marketers can also combine content from Niche creators with content from other people on Twitter who have granted the advertiser explicit permission to use their Tweet.

Brands can tell rich stories comprised of a series of videos, or they can combine a single video with follow-up Tweets that describe pricing, features, hyperlinks to the brand’s website, or even Tweets highlighting how much consumers love the brand. We’re excited for marketers to begin testing this ad unit as a new way of engaging with their customers.

We currently support the Tweet Engagements objective, and advertisers will only be charged for the first Tweet engagement from a user. Support for additional objectives will roll out in the coming weeks and months.

Since we began discussing this ad unit, advertisers have expressed their excitement about being able to leverage the Promoted Tweet Carousel to accomplish their marketing objectives.

In Australia, William Hill was one of the first brands to utilise the Promoted Tweet Carousel to get involved in the conversation around #Euro2016

‘As one of our key partners, we are always looking for new and innovative ways to work with Twitter to reach the right audience. The new Promoted Tweet Carousel has been a great way for us to get across the excitement and passion of the Euros. The Euros is an important date on the 2016 sporting calendar and we wanted to make sure that we were where the Football conversation was happening, and that is Twitter.’ 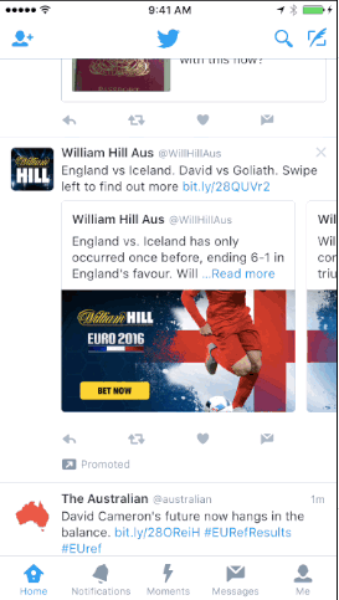 Disney is leveraging the Promoted Tweet Carousel for their new movie The BFG (The Big Friendly Giant) to share the conversation happening around “Gobblefunk,” which is the language of the Giants in The BFG. Disney pulled in Tweets from their own handle as well as from a variety of influencers on Twitter who gave their permission.

“How we communicate with our tribe needs to be just as innovative as the cars we build. We embrace platforms that have the same purpose as we do — putting people first. Twitter’s new Promoted Tweet Carousel helps us show multiple videos within one unit, and this is a great opportunity for Volvo and Twitter to continue partnering in a way that doesn’t interrupt the user.”

“The DNA of Gatorade is built on innovation, so testing new storytelling formats on a top destination for live sports is a natural fit for our brand.”

Promoted Tweet Carousel is available as a limited alpha to select managed accounts in select global markets. Reach out to your account team to learn more about availability.