As we enter the final week of the 2016 Australian Federal election campaign, the #ausvotes Twitter conversation has lit up since the election was called.

According to a study commissioned by Twitter with Galaxy Research, almost six in ten (56%) of surveyed Australian Twitter users say they are currently uncommitted on how they will vote on 2 July, and almost one third (29%) of such Australian Twitter users believe that all major parties are “pretty much the same”, making Twitter a perfect place for minor party candidates and Independents to put forward their last minute pitch and reach those undecided voters.

Sixty three percent of females on Twitter say they are currently undecided compared to 52% of males, indicating the vote of many Aussie women is still up for grabs. Women are coming to Twitter to get information on the election with 80% of female users saying they see Twitter as a good way to discover the points of view of different people and nearly one third (31%) saying Twitter helps them get information that makes it easier to make a decision come polling day. 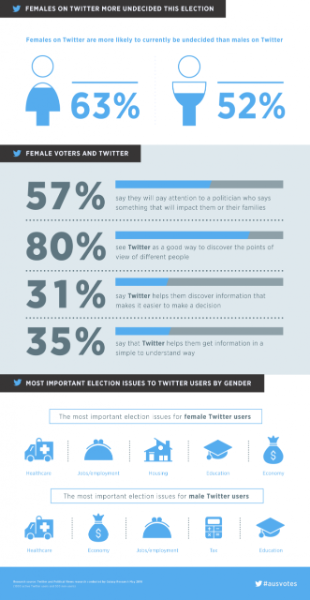 According to the Galaxy research almost 6 in 10 (59%) monthly Twitter users are millennials aged 18-34, making Twitter a great place for candidates and parties to reach the youth vote. Two thirds of millennials (66%) say that Twitter has helped them formulate or reconsider their political views and more than three quarters (78%) say that Twitter is a good way to discover a variety of points of view from different people.

For all the latest updates from #ausvotes throughout the election campaign, follow @govAU.