The most Tweeted shows from Australian TV’s 2016 kickoff

Monday was 2016’s biggest night of television with some of Australia’s favourite and most engaging TV shows returning to our screens for the start of ratings season.
The night saw the commercial networks go head-to-head with their big reality franchises (#MKR, #GotTalentAU, #ImACelebrityAU) beloved drama series returning (#TheXFiles, #HomeAndAway), and an array of other popular shows hitting our screens again (#QandA, #4Corners, #TheFarmerWantsAWife).

As the platform with the most influential users in Australia, it was no surprise to see the most Tweeted shows using Twitter to distribute shareable content and encourage real-time interaction. Here’s the shows that were the most Tweeted on the night. 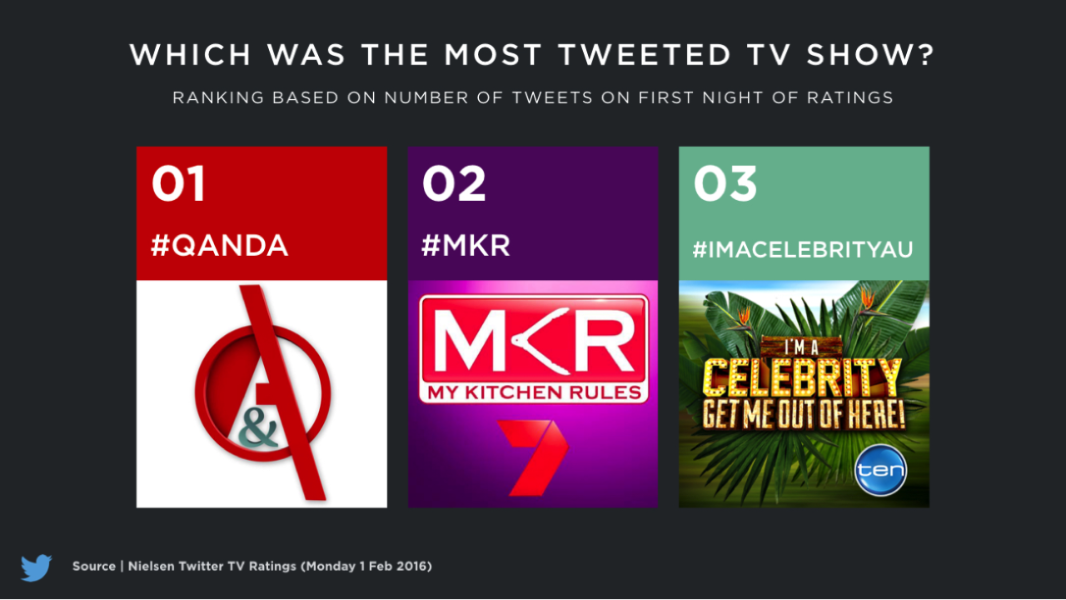 A key element in each of these shows is that they embraced influencers and interactivity to drive reach and engagement around their television shows.

Influencers
The most influential people are on Twitter. And through Twitter, anyone can become influential. Because of this, TV conversations on Twitter quickly travel far and wide across TV, radio, news websites and other social media platforms.

Here are some of the biggest influencers talking about last nights Top 3 shows:

Interactivity
Twitter is the simplest way to interact with your favourite shows, whether it’s talking directly to cast members, suggesting ideas or answers with a hashtag, or providing real-time feedback through Twitter Polls. Here’s a few of the best examples of interactivity from last night:

#QandA
Last night Q&A introduced another form of Twitter interactivity by asking fans of real-time feedback on a topic the panel were discussing. The poll ran for five minutes and the final result was revealed on-air by Tony Jones as soon as it had finished.

#ImACelebrityAU
I’m A Celebrity…Get Me Out Of Here! asked the Twitter audience live on-air to name their studio tortoise. After a couple of segments, hosts Chris Brown and Julia Morris revealed some of their favourite suggestions from Twitter including the overall winner VolderTORT!

For the latest updates about #MustTweetTV, make sure you’re following @TwitterTVAU.