The ARIA Awards (@ARIA_Official) will celebrate 30 years this year, commemorating three decades of recognising excellence and innovation across all genres of Australian music.

For the second year in a row, music fans will decide an ARIA winner exclusively via Twitter. Last year, more than 2.5 million Tweets determined the Best Australian Live Act and this year, Twitter is giving fans the opportunity to vote exclusively for the Best International Artist category.

Fans all over the world can start voting for their favourite International Artist now by heading to Twitter using the following hashtags: 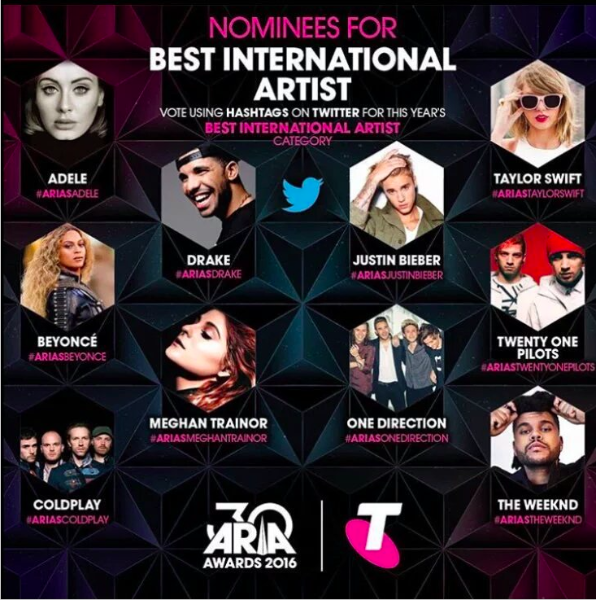 And that’s not the only way to celebrate the #ARIAs on Twitter. We will be unveiling 10 custom Twitter emojis for this year’s #ARIAs, and the first is active today. Tweets with the hashtag #ARIAs will generate a special 30th Anniversary emoji. The remaining 9 emojis will honour music artists and will be unveiled in coming weeks.

Flume (@FlumeMusic) is already a winner, with the most nominations, having a total of 11 #ARIAS nominations and three wins already in the bag. Troye Sivan (@TroyeSivan) is the next most nominated artist with seven nominations, while Illy (@illyal), The Avalanches (@TheAvalanches) and Sia (@Sia) are all up for six awards each.

Voting for Best International Artist is live now, so get Tweeting (you can vote more than once) to show your support for your favourite artist!