With anticipation building for the final two weeks of footy, we’ve had a look back at the-season-that-was… on Twitter. Which player dominated? Which club delivered wins on and off the field? Who provided the laughs? Who had the most growth?

We’ve analysed the data and will reveal our awards for the best AFL players and Clubs on Twitter for the 2016 season.

We’ve named our Twitter All Australian based on the players that performed the best on Twitter. We took a look at Follower numbers and growth, engagement based on Retweets, content that the fans “liked” as well as mentions throughout the season.

Most fans would certainly think there are a few surprises! Essendon players who were suspended, injured heroes, retiring greats… this team has all of those… as well as players who dominated on the field like never before. It’s a wonderfully balanced team of youngsters, guns in the prime and absolute legends in the final years.

Our captain is Dane Swan (@swandane), who has proved himself to be a must-follow athlete. His humour, honesty and willingness to try different things has seen him elevated to Twitter’s Player of the Year. We saw him Tweet live on The Footy Show (@AFLFootyShow), take over @CollingwoodFC to live Tweet games from his couch and deliver comedy gold week after week.

His deputy is the one and only Patrick Dangerfield (@Dangerfield35). Danger has won every award possible this year, but he couldn’t quite pip Swannie for the big one. With the Cats still in the Finals, Danger will provide fans insights and access into the final few weeks of AFL footy this year. Must Watch Twitter. 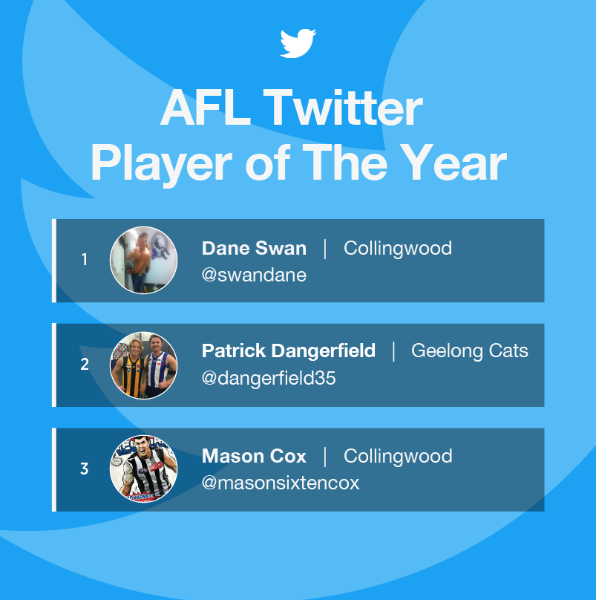 1. Dane Swan (@swandane) – We’re sure Dane Swan can think of no greater honour in his final AFL season than claiming our Twitter player of the Year award. The Collingwood stalwart was still captivating fans, gaining the most followers of any AFL player in his last season. His thank you Tweet to fans upon his retirement was classic Swannie and his honesty and humour endeared him to a legion of fans.

2. Patrick Dangerfield (@dangerfield35) – Number two on our list is Patrick Dangerfield. The biggest trade of the off-season, fans around the country (not only Geelong) love and admire Danger on and off the field. He’s always been an avid Tweeter and a favourite of the @TwitterSportsAU team. He gives fans a unique insight into his life beyond footy, loves Tweeting with other players, athletes and media while bringing fans into the inner sanctum.

3. Mason Cox (@MasonCox) – There is something enthralling about an American playing Aussie Rules, and Coxy has come from nowhere to claim third place! His Tweet about running an AusKick clinic despite having only recently taken up the sport was the most Retweeted player Tweets of the season and truly one of the best. 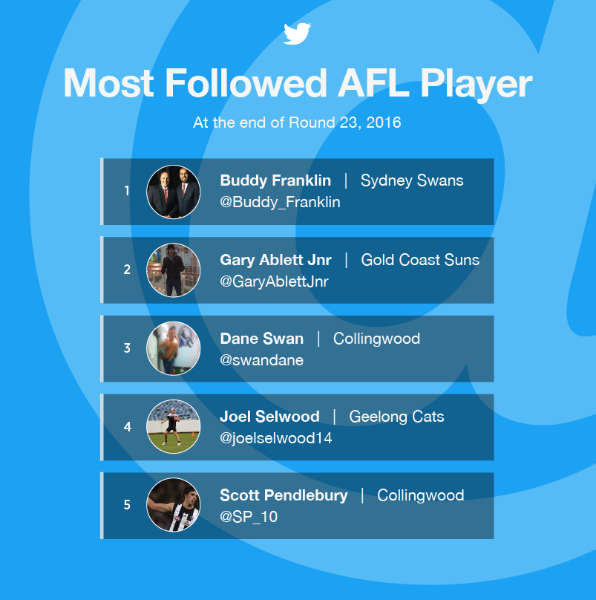 Everybody loves following their team and when it comes to AFL, they rarely let the fans down. Every team has delivered quality, unique content to their fans on Twitter in 2016. Whether it’s video from the rooms as the boys sing the song, photos from the training track or the latest injury news… every sports fan in Australia should be following their favourite teams on Twitter.

Collingwood (@CollingwoodFC) lead the pack at the end of the Home and Away season. No real surprises here given their membership base, but the Pies have a challenger, with Adelaide Crows (@Adelaide_FC) taking over the Number 1 spot after a big Finals campaign. Essendon (@EssendonFC) have gone through one of the most harrowing and intriguing years, but finishing with the wooden spoon hasn’t dampened their fans enthusiasm and interest on Twitter.

With two weekends of footy left there is no better time to follow all of the action on Twitter. Here are our must follow accounts as we approach the AFL Grand Final #AFLGF: