The UEFA Champions League’s (@ChampionsLeague) first all-German final came to London’s Wembley Stadium (@WembleyStadium) today, and it was Bayern Munich (@FCBayern) who left London with the trophy after a game that lit up Twitter with a global conversation.

The Champions League Final is the biggest annual football match in Europe. When major events happen in the world, they also happen on Twitter, and from one hour before kick-off until 30 minutes after the final whistle, this game generated more than 4.8 million Tweets around the world.

At its peak, the match dominated eight of the 10 global trends on Twitter, and seven of the 10 UK trends. Arjen Robben’s 89th-minute goal broke Borussia Dortmund’s (@BVB) hearts and meant a team which joined Twitter at the start of this season ended it as the champions of Europe.

In fact, Robben was the most tweeted-about player of the game with more than one million mentions of his name on Twitter tonight.

Robben’s goal gave Twitter a peak of conversation of 107,229 Tweets Per Minute (TPM) - but even that was eclipsed by the 117,601 TPM when the final whistle blew to signal that Bayern were the 2013 #UCLFinal winners.

The previous two highest peaks in conversation had been @FCBayern’s opening goal in the 60th minute from Mario Mandzukic (@MarioMandzukic9), which led to 77,009 TPM, and @BVB’s equaliser seven minutes later from an Ilkay Gundogan penalty (71,299 TPM).

The biggest peaks in Tweets per minute were as follows: 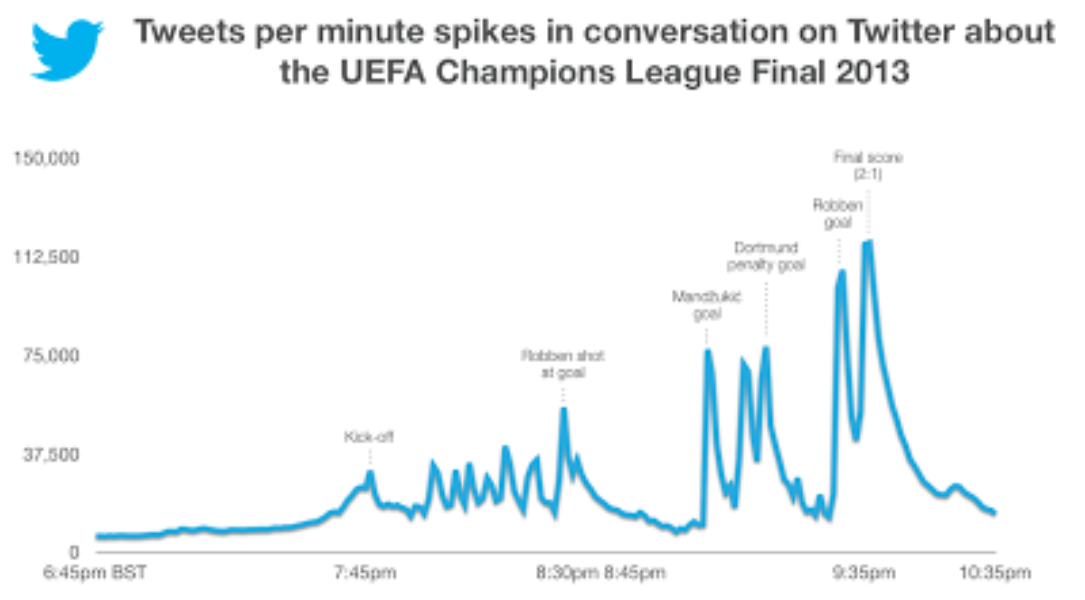 There had been a global conversation throughout the day on Twitter about the game, with both clubs (@FCBayern and @BVB) and the official @ChampionsLeague feed helping to build the atmosphere for fans. The official hashtag for the match was #UCLFinal, which was used a quarter of a million times from one hour before kick-off until to 30 minutes after the final whistle. Before the game AC Milan’s (@ACMilan) Kevin Price Boateng (@KPBOfficial) tweeted a good luck message to his brother, Jerome Boateng of Bayern (@JB17Official) …

… which was broadcast on the giant screens around Wembley Stadium.

Many of the world’s leading sports teams have found that using tweets is a great way of engaging fans inside stadia - and UEFA, via the @ChampionsLeague account, did that very effectively using Wembley’s (@WembleyStadium) screens tonight. At one point before the game, @BVB were able to get a message thanking their fans inside the stadium by tweeting the official hashtag #UCLFinal so the tweet would appear on the screens …

But it was to be Bayern’s night, not Dortmund’s, and at the final whistle, high-profile players from around the world began to tweet their congratulations. Everton’s (@Everton) Marouane Fellaini (@FellainiM) tweeted this …

Congratulations to FC Bayern München. Best team in Europe this year. They deserve to win the Champions League.

But the night belonged to Bayern, and as they partied in front of their fans, tweets appeared on the giant stadium screens above their heads from global admirers. One tweet that summed up the night best was this one, fittingly from @ChampionsLeague …

But the last word went to the new European champions, who even had a celebratory hashtag ready to roll out at the final whistle …