Getting creative with #Vine

By
Wednesday, 1 May 2013
Link copied successfully

In January we launched Vine, a mobile service that lets you create and share beautiful, short looping videos. Posts on Vine are about abbreviation — the shortened form of something larger. They’re little windows into the people, settings, ideas and objects that make up your life. They’re quirky, and we think that’s part of what makes them so special.

And now we’re introducing an update to Vine that we think you’ll love. Over the last few months, we’ve asked for your feedback on a lot of things, from reporting bugs to suggesting new features. We’ve been listening, and here are a few new additions to Vine:

Vine now has a front-facing camera and you can mention people! Thanks Dom Hofmann and team. vine.co/v/bx9xuwgAnqF
— Jack Dorsey ( @jack) April 30, 2013

Mentions
Vine now supports mentions, so you can tag people in your post. Users who are mentioned will receive a notification in Activity. To mention a user, type their @username and select the name among the suggestions you see. See the screenshot below for an example — when I type @chris, I see suggestions for Chris Fry, Chris Hardwick and Christofer Drew. When I select Chris Hardwick, his Vine profile will automatically link in my post’s caption. 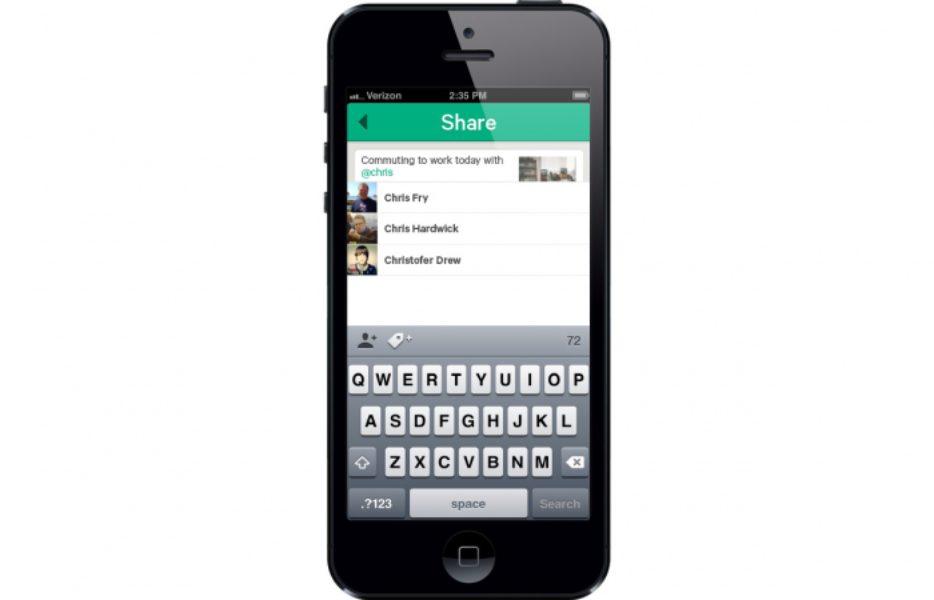 Search
Finally, this update also includes search improvements, it’s now easier for people to find users and posts that are of interest to them.

Creativity
Since it launched, Vine has been used in all manner of innovative ways across the worlds of fashion, film, music and sport, as well as by Twitter users across the world, such as @_jacsun_, who created this Harry Potter-inspired video:

And this kitchen scene from @origiful:

My Vine this morning is #1 in Popular Now! vine.co/v/bx9IeZauwgK Who knew walking bananas would be so popular?
— Ian Padgham ( @origiful) April 30, 2013

Vine users were treated to exclusive behind the scenes snippets from Victoria Beckham, who shared exclusive video of models wearing her latest collection at New York Fashion Week:

Vine has also allowed unrivalled access to stars of the music world such as Example (@Example) who posted this video of himself working on new tracks from his studio:

And in the world of classical music, @ClassicFM attempted to capture their Classic FM Live event in a series of vines, including this tour of the Royal Albert Hall:

Chelsea fans who couldn’t make it to the clubs game against FC Basel could soak up the pre-match atmosphere pitch side with a Vine of Petr Cech coming onto to start his warm up.

UEFA chose Vine as a way show off the Champions League Final trophy, including ribbons featuring the official hashtag #UCLFinal:

You can download this version of Vine for free from the App Store now.