The Road To Wembley

By
Friday, 24 May 2013
Link copied successfully

With only one day to go until the Uefa Champions League Final (#UCLFinal), anticipation is reaching fever pitch, and Twitter is the place where fans from across the world are coming together to join the global conversation and share in their passion for the beautiful game.

And for followers of FC Bayern Munich (@FCBayern) and Borussia Dortmund (@BVB) it’s been a long journey to Wembley. Anyone looking for a reminder of that journey should check out this visualisation of how how it played out in Tweets.

Here’s a selection showing the semi final matches - can you spot the goals? 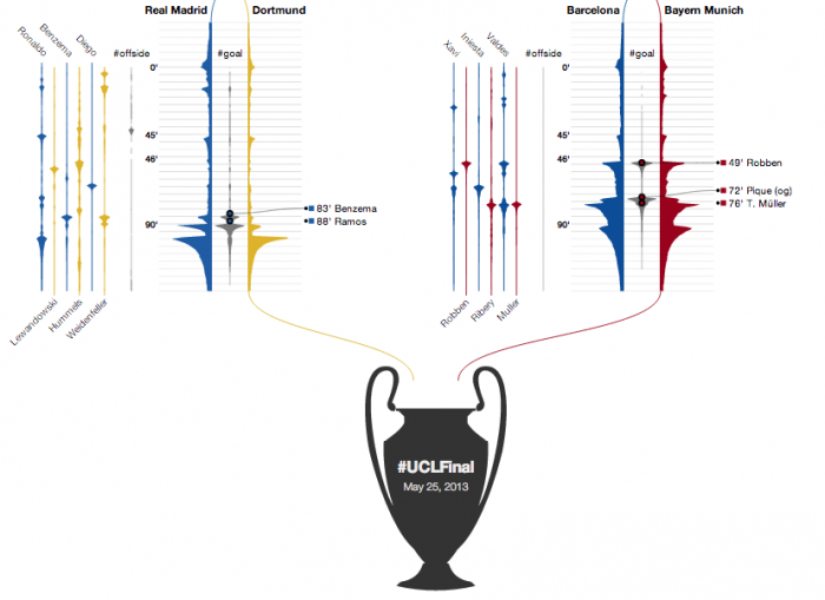 Former German captain Ballack, who played in Uefa Champions League Finals with Bayer Leverkusen in 2002 and Chelsea in 2008, took over the @adidasfootball account to answer fans’ questions, which were sent in using the hashtag #allforthis. Here he is gearing up to get started:

Michael Ballack is here and we’re ready to start the Q&A! #allforthis pic.twitter.com/n8sDtFSe0l

Following Ballack’s takeover, three-times winner of the FIFA World Player of the Year Zidane took the stage and answered fans’ questions about his glittering career and his views on the game. Here he is mid-chat:

He gave one fan this tip for tomorrow’s result:

ZZ: @FCBayern, but anything can happen!

He also revealed who his favourite players are here in the UK:

Q. Who is your favourite British player? #allforthis

ZZ: Currently it’s Bale. But my old favourite was Shearer, I even once used his goal celebration!

Zidane and Ballack have a #UCLFinal connection - the pair met on the pitch at the Uefa Champions League Final in 2002, when Zidane’s Real Madrid played Ballack’s Bayer Leverkusen. And when Zidane was asked this question on Twitter today, his answer came as no surprise:

Check out the @adidasfootball feed to see more answers from these two footballing legends.

For those of you following the game in Germany this weekend, we’ve created this page listing all of the important German Twitter accounts around tomorrows event.

And don’t forget, you can keep up to date with the latest Uefa Champions League Final news on Twitter by following the official hashtag #UCLFinal.