Since Twitter’s inception, we have seen our UK users come together on the platform in incredible ways. As we look back over the two years since we opened the doors of @TwitterUK, we continue to be inspired by the way UK users have taken Twitter and made it their own.

And as we celebrate our second birthday, we took at look at where Twitter users in the UK are tweeting from.

In creating this visualisation no maps were used, but the location of Tweets begin to tell a story: roads, towns and even borders emerge roughly reflecting the density of the UK population. Geo-located tweets are only a small sample of the millions sent, but provide a valuable picture of how Twitter is part of our everyday lives. 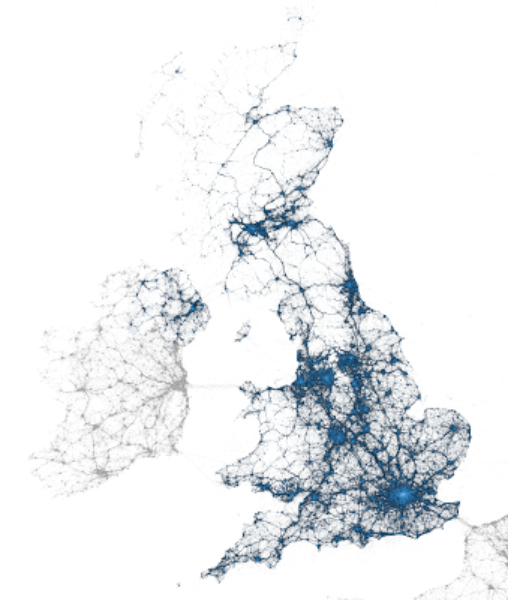 From the Champions League Final to the Queen’s Diamond Jubilee, the announcement of an upcoming Royal Baby or the retirement of Sir Alex Ferguson, Twitter has been the global town square for big news events. You are gathering on Twitter to see first hand accounts of the action and share in the news with other people across the world.

When the eyes of the world were upon London for the 2012 Olympic and Paralympic Games, fans and athletes took to Twitter to support their nations and celebrate sporting achievements. Boris Johnson’s (@MayorofLondon) infamous dancing at the Olympic closing ceremony was responsible for the UK’s highest spike in conversation in 2012, and as Usain Bolt (@UsainBolt) broke records on the track, he also clocked up more than 80,000 tweets per minute when he won the 200m final.

And it’s not just the big news events that have inspired you. Every day we hear more tales of Twitter users in the UK using the platform in amazing ways. For example, after violence spread during the 2011 London riots, the account @Riotcleanup brought tens of thousands of Londoners together to organise a massive clean-up using the hashtag #riotcleanup.

In April 2013 we saw Joanne Mehaffey (@jomehaffy) turn to Twitter for help after her mother went missing. Unable to get a phone signal, she tweeted:

After hundreds of RTs, her mother was found.

Since launching Vine, we have seen your creativity shine in new ways. From One Direction’s backstage antics to Classic FM’s tour of the Albert Hall, the challenge to produce six seconds of footage has swept the nation.

We wanted to take this opportunity to thank you, our users, for making Twitter what it is today. As we enter our third year here at @TwitterUK, we look forward to the yet untold stories that will emerge as people across the UK gather in the new global town square.