Visualised: The most influential #DoctorWho Tweets, ever

Fifty years ago, when Doctor Who appeared in black and white and police boxes were actually used by policemen, if you wanted to talk about anything in 140 characters you might send a telegram. Now thousands of Tweets are sent every time The Doctor steps out of his Tardis.

This Saturday November 23 sees the 50th anniversary of Doctor Who with a special broadcast of The Day of the Doctor when thousands more will turn to Twitter to debate the dramatic events in real time. The event has been hotly anticipated on Twitter with fans using the hashtag #SaveTheDay.

If you just can’t wait for the episode itself, check out this interactive guide designed by Twitter’s Nicolas Belmonte. It shows the top 500 most-mentioned and retweeted Doctor Who Tweets since Twitter launched in 2007. 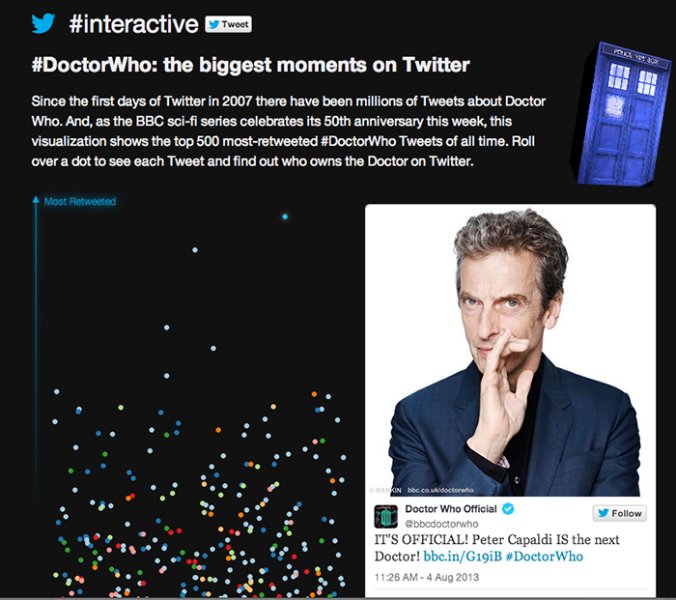 Click on the image to explore the interactive guide.

Tip: See what happens when you roll over the Tardis in our interactive guide

See which accounts have dominated the conversation and which Tweets have been the most discussed, as each episode is debated live on Twitter. The pack is led by this Tweet, which was retweeted more than 25,000 times:

But the official BBC Doctor Who account (@bbcdoctorwho) is not the only account to garner thousands of Retweets. Even the baddies have got in on the action:

THE DALEKS WOULD LIKE TO SEE THE DOCTOR’S BIRTH CERTIFICATE, BUT WE WOULD SETTLE FOR HIS DEATH CERTIFICATE. #DoctorWho

Here’s a little taster of hashtag frenzy that will accompany the show this weekend: