This summer, many millions of people across the globe will tune in to watch the 2014 FIFA World Cup, and that will include 90% of UK Twitter users, according to a new study from GlobalWebIndex (@globalwebindex).

The study, the details of which we have put together in the infographic below, highlights how many UK users will be tweeting throughout the month-long celebration of football, which is already generating a higher level of buzz than four years ago. With the games in Brazil now only two months away, one in three UK Twitter users say they are more interested in the 2014 World Cup than they were in South Africa in 2010.

That level of excitement means that millions of fans will watch the games — and many of them will be actively tweeting to celebrate the highs and lows of the onscreen action. GlobalWebIndex found that 87% of UK users will be watching the World Cup on live TV, and the vast majority (79%) will be doing so with others.

That latter fact highlights how live TV is inherently social, conversational, and in the case of the World Cup, global. This all contributes to make Twitter the perfect platform to extend fan fervour by bringing football together supporters wherever they are.

As part of our focus on football we worked with @CraftRealities and spoke to fans to get their stories about how they use Twitter to connect and express themselves. Here are two video clips where fans talk about football and Twitter and how the two make for a great match. These two feature @Arsenal fan and blogger @LittleDutchVA.

#TwitterFootball - Football fans talk about how they use Twitter to connect

Even when fans are not watching a particular game, @globalwebindex found they are turning to Twitter to check for news and results. The research reveals that:

Great performance from the lads and another brilliant atmosphere at Old Trafford. That one was for the fans!

What a performance today. Another massive 3 points!!!! On to the next one!!!!

Congratulations to the boss on reaching 1000 games! Unbelievable! Pleasure to be a part of it! #AFC pic.twitter.com/LWMVT3CwRO

With 49% of UK Twitter users planning to watch all England matches (and as many other games as possible), the series represents a significant opportunity for brands looking to connect in the moment with consumers using TV + Twitter.

With fans looking at the TV screen and at their mobile phones (80% of UK Twitter users access the platform via a mobile), many are influenced by the messages that they see from brands. We know this from previous research that told us 56% of Twitter mobile users are influenced by content on Twitter when they are buying a product or service. That means savvy brands, tweeting engaging and relevant World Cup content, will be able to connect with fans whether they are watching at home or away. 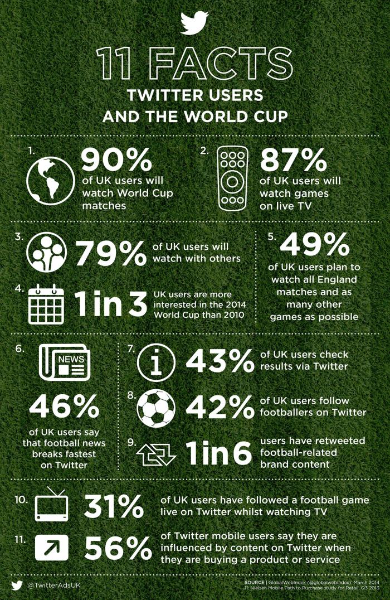