Across the globe, people send more than 500 million Tweets per day — and as the year comes to a close, we look back at how 2014 played out on Twitter in the UK and beyond.

It was the year in which England crashed out of the World Cup, the Queen sent her first-ever Tweet, Scotland debated independence, and @Philae2014 Tweeted live from space as it landed on the Rosetta Comet.

And for our many millions of users, 2014 was also the year of the selfie as Ellen DeGeneres’ now-famous Oscars party photo became the most Retweeted ever — and this year’s Golden Tweet.

As the year comes to an end, we take a look back to discover what got the UK and the world Tweeting in 2014 — discovering the biggest Tweets, the stand-out moments, who joined and what trended.

Worldwide, a record 672 million Tweets were sent about this year’s #WorldCup finals in Brazil. In a World Cup year it is perhaps no surprise that eight of the UK’s top ten most-Tweeted-about moments were sport-related.

Joining the World Cup and the Champions League were two other major UK events — the BRIT Awards, in which One Direction won the Twitter vote for the best album, and 1 January, as Twitter users ushered in the New Year. Here are the top ten UK moments:

Year of the Selfie

Ellen’s Oscars selfie has been Retweeted more than three million times, making it the most shared message ever on the platform — and this year’s ‘Golden Tweet’.

In fact, since 1 January, the term ‘selfie’ has been mentioned more than 92 million times on Twitter — a 500% increase on 2013 — as people from all walks of life have come to Twitter to share their photos with followers around the world. Other memorable selfies included:

It also became the summer of the photobomb, as major UK events came to life with a series of hilarious appearances from royalty and celebrities:

One Direction were early adopters of Twitter and have used it to generate a worldwide fanbase and an international sensation on the platform.

Worldwide, 2014 was the year that Twitter’s most-followed star @KatyPerry passed the 60 million mark. She’s closely followed in second place by Justin BIeber on 56 million, and Barack Obama, who, with 50 million followers, is the third most-followed person in the world, and the most-followed political or world leader.

The top 10 most-followed accounts in the world are:

When it comes to the UK, the most-followed accounts come almost exclusively from the world of music, with One Direction and its members taking five of the ten top spots. If you also included Niall Horan, the band’s only Irish member, he’d take the fourth spot with 20.6 million followers, making him 27th in the worldwide ranking.

The two exceptions to the musical trend were actress Emma Watson, who used the platform to campaign for her #HeForShe gender equality campaign earlier this year, and the @BBCBreaking news account.

Trends show the hottest emerging topics as they break, making Twitter the place to keep up-to-date with what’s going on in your world. The list of “Top Trends” showcases the highest-trending hashtags of the year.

We determine this using the methodology behind our Trends algorithm, which looks for notable spikes in conversation. (As such, something can be a high trend despite another term being used more times overall.) Remember that trends don’t give any indication of sentiment — when something trends, that simply means it has captured the UK’s attention, not that it was necessarily a hit. 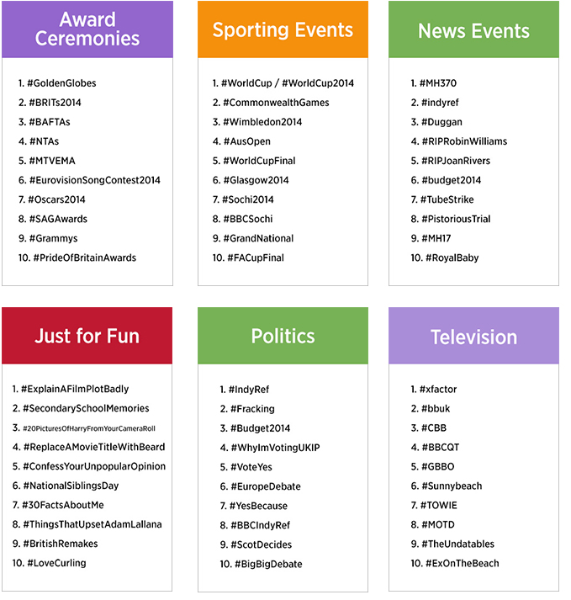 As people around the UK join Twitter, so do well-known figures from the UK and beyond.

Here’s a selection of people and organisations that signed up to Twitter in 2014, and their very first Tweet:

And to relive more of the biggest moments from around the globe this year, head over to 2014.twitter.com.