Last year was huge for British tennis as @andy_murray won the men’s singles title at Wimbledon — the first time a Brit has won in 77 years. Now he’s back to defend his title, and the interest on Twitter will be huge: in 2013 alone there were 5.7 million mentions of the tournament globally.

With more than 85% of the seeded players in the singles draw on Twitter, this year promises to be the most social #Wimbledon experience ever.

In the UK, one in three users say they will turn to Twitter to keep up with live Wimbledon matches this summer, according to recent research commissioned by Twitter UK and conducted by Vision Critical (@visioncritical).

For those who can’t make it to Wimbledon, Twitter can make you feel closer to the event. It’s simply more exciting to watch the action on TV and follow the conversation on Twitter.

As many as 65% of UK users told us Twitter makes watching live sporting events on TV more exciting, and 44% say that Twitter helps them feel closer to Wimbledon when they cannot attend in person.

These are just some of the stats we’ve include on this infographic below, which offers insight into how our users are active on Twitter as Wimbledon fortnight begins. 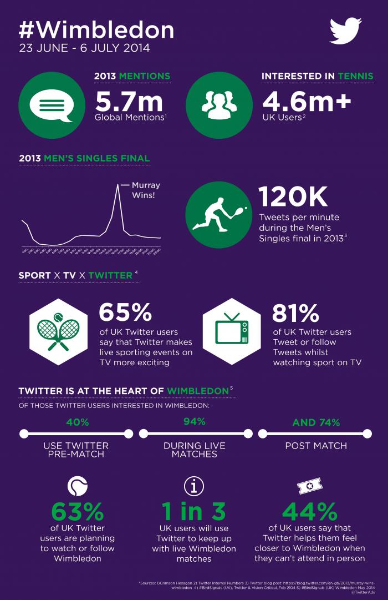