With London Fashion Week (#LFW) fast approaching, there are many ways to use Twitter to convey the excitement and buzz of the catwalk shows. Brands can showcase everything from the backstage preparations to the thrill of those front row moments, and the latest trends and new season looks.

We’ve put together a few tips highlighting how fashion brands can get more out of Twitter and bring fashion followers closer to the action of #LFW.

Earlier this year we introduced a new feature for creating photo collages: the ability to share up to four photos in a single Tweet. It is a perfect way for you to show a number of different outfits on Twitter or the complete look as @voguemagazine has done with its Tweet featuring @Lupita_Nyongo and @Prada.

Alternatively, use multi-photo Tweets to breakdown moments, such as a model preparing backstage and then taking to the runway, or how a look is created stage by stage.

2. Use Vine to capture a show in six seconds

Vine is an ideal app to help fashion brands capture exclusive moments from backstage preparation to classic runway shots. As an example, check out what Matthew Williamson (@MWWorld) does in this “first sketch to flutters of feathers” on the runway.

Use Vine to show hair and makeup artists at work, tantalise the audience with outfit previews or show a model walking down the runway as @Burberry have done. Also look to last year when TONI&GUY Hair Meet Wardrobe (@Hair_Wardrobe) ran a series of Vine videos showing different looks, backstage peeks and catwalk action.

While Vine is great for capturing the moment and showing time-lapse video, GIFs are a good way to take existing video content that’s been prepared in advance and share with your audience.

GIFs on Twitter can be used to show clips of your latest TV ads, amusing moments or video content, such as reminding people that your sale is now on. Here are some examples from @TopShop, @stylecable and one of our own that demonstrates eye-catching content brought to life in a GIF. 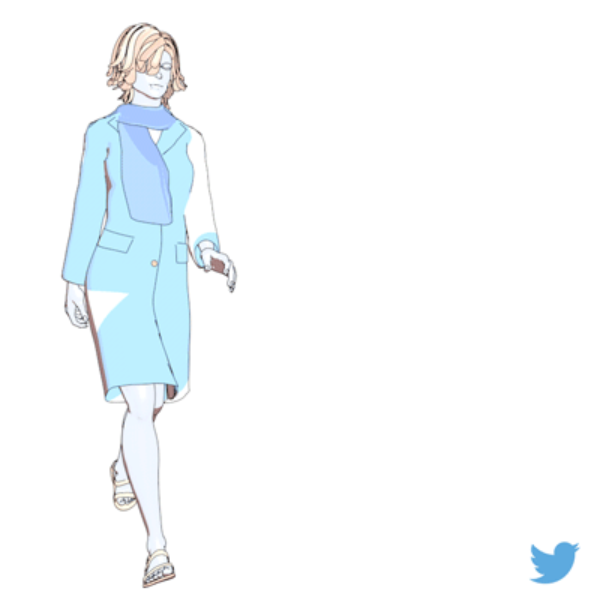 The British Fashion Council (@BFC) has live-streamed a number of shows from #LFW on Twitter in the past and will do so again this year. @Burberry and @Topshop have also run live streams, showing how it is a great way to bring fashionistas and influencers from around the world to the front row.

Live-streaming is also something that fashion lovers on Twitter are very interested in. New research* shows that of those UK users who are planning to watch content streamed online, two-thirds will be using Twitter while doing so.

Another great example is @HunterBoots. At #LFW in February it used Twitter to share an insider’s experience with users worldwide. It began with the promise of backstage access, and offered live streaming of the show – which featured a performance by @DynamoMagician – using a Twitter Player Card. Afterwards, it tweeted show videos and images of VIPs in the audience such as @KatyB and @JessieJ.

5. Alert fashion lovers to a sale and drive users to retail partners

Any big occasion is a perfect opportunity to drive buzz around a sale. Twitter has proven success in not only creating excitement around online sales, but also in driving customers to retail websites.

For its 180th birthday celebrations, @rimmellondonuk created its first-ever flash sale. It priced products at 180p and kept the sales to just 180 minutes. It then used Twitter to drive customers to retail partner websites such as @BeautyatTesco, @asos and @superdrug to great effect. Tesco sold out of its sale stock in 25 minutes while others like @lookfantastic sold out in 45 minutes.

There’s little that fashion fans, bloggers and journalists enjoy more than being able to put burning questions to those at the heart of the industry. Hosting a Q&A on Twitter is a perfect way to do that.

While Twitter is a great Q&A platform, you can take it a step further and run a Vine Q&A. With its concise six-second nature, Vine is ideal for creating a Q&A session that delivers punchy questions and answers, which also makes for great content to share.

Check out the examples below from @LondonFashionWk, which has run a series of Q&A’s on Twitter and Vine asking users to put their questions to the likes of @daisylowe, @angelascanlon, @susiebubble and @ZoeJordanStudio.

7. Open a pop-up shop and power it with Tweets

Fashion house @MarcJacobsIntl recently announced plans to open the Daisy Marc Jacobs Tweet Shop in London’s Covent Garden for three days from Aug 15. To get your hands on the fragrances on offer in store you will need to pay in Tweets and Vines using the hashtag #MJDaisyChain.

Those who tweet a creative picture with the hashtag will be rewarded with a bigger item. Better still, the top pictures each day will win a Marc by Marc Jacobs handbag.

Twitter is the natural platform for big announcements, or to tease about news that is about to break.

Great examples here from @Topshop, revealing the new face of the brand in @CaraDelevingne, and @Burberry unveiling its Autumn/Winter 2014 campaign and the arrival of special guests.