But that didn’t stop England fans from tuning in for the final 90 minutes of their World Cup campaign. There were 1.5 million Tweets about the match, with — perhaps tellingly for England’s on-field performance — the highest spike in Tweets per minute coming as the final whistle was blown (18,836 TPM).

Compared to England’s opening match against Italy (7.2 million Tweets) and second group game against Uruguay (6.7 million Tweets), it soon became apparent that England — who were ruled out of the tournament last Friday evening — were no longer capturing the public’s imagination. Here’s how the game played out on Twitter: 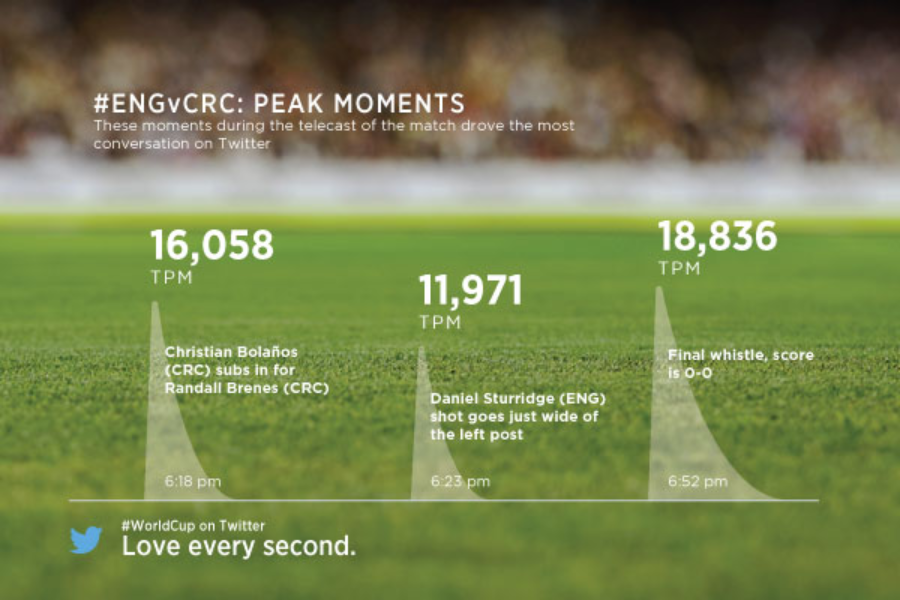 And whilst @England’s World Cup campaign may have drawn to a close, the tournament continues to dominate conversation on the platform.

Many supporters are taking to Twitter to discuss their newfound World Cup allegiances. There seems to be widespread backing for #USA (@USSoccer) following their spirited performances in Group G, although Iran (@TeamMeliIran) and Brazil (@CBF_Futebol) have also got their fans:

Piers Morgan (@PiersMorgan), United States (#USA)
Morgan didn’t take long to confirm that he would be switching allegiance to @USSoccer. The dark horses of Group G, he’ll have to keep a close eye on #USA v #GER on Thursday as they look to top the group.

Joey Barton (@Joey7Barton), Chile (#CHI)
Barton appears to be following Chile from here on in, labeling them a breath of fresh air to the tournament.

Dan Walker (@mrdanwalker), Chile & Colombia (#CHI / #COL)
It seems that presenter Dan Walker has a taste for the South American flavour of #Brazil2014.

David Schneider (@davidschneider), Iran (#IRA)
Is this a hint from writer and comedian David Schneider that he has a soft spot for the Iranian National Team?

So whilst it may be another four years of hurt for @England fans, perhaps their team’s exit will give them the chance chance to kick back and enjoy the tournament, safe in the knowledge that whichever country they are routing for, they can join the party on Twitter.