As @England met Uruguay (@AUFOficial) in Sao Paulo tonight, fans came together off the pitch to share in the dramatic highs and lows of the evening, 140 characters at a time.

There were 6.7 million Tweets about the game as fans joined the roar of the crowd on Twitter:

But as the evening went on, England’s hopes turned slowly to disappointment. Click on this interactive map to see the world light up with Tweets as England’s World Cup dreams drift into the distance: 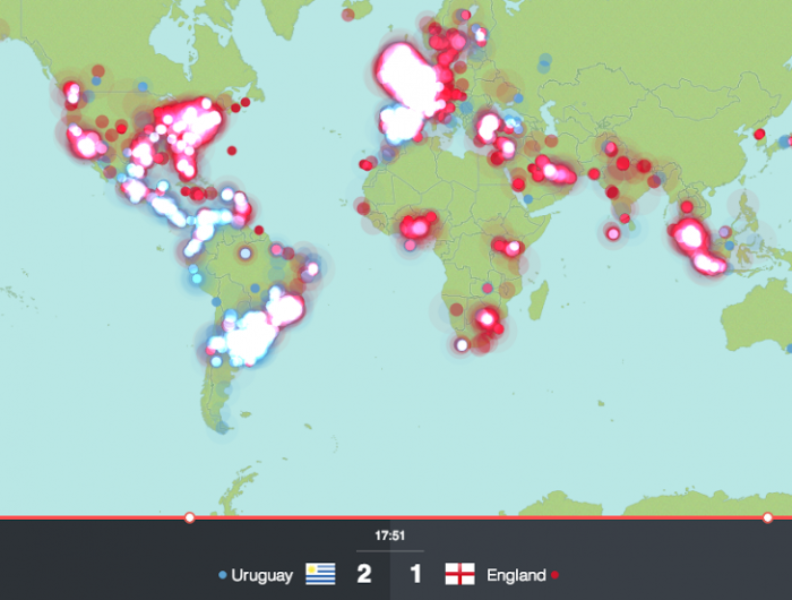 Uruguayan striker Luis Suarez (@luis16suarez) dominated both on and off the field, scoring both goals for his team to give Uruguay a 2-1 victory and being mentioned on Twitter more than 1.5 million times during the game, more than any other player:

England’s only goal scorer @WayneRooney was his team’s most mentioned player, with more than 800,000 Tweets about him.

#URU v #ENG Which players were the most-mentioned on Twitter? #WorldCup pic.twitter.com/CEmd4hVxSw

The moments in the match that generated the most tweets coincided with the goals:

#URU v #ENG These are the moments that drove the most conversation on Twitter #WorldCup pic.twitter.com/wxUTIaHwSn

In an evening that ultimately ended in bitter defeat for #3Lions, fans took to Twitter to share their hopes and dreams, and then to share commiserations as England’s #WorldCup hopes slipped further into the distance.

In this collection of Tweets we round up some of the most memorable messages of the evening:

But, with group qualification now out of @England’s hands, last word goes to England striker Daniel Sturridge (@D_Sturridge), who summed up the dejected mood of players and fans alike in this Tweet.

I feel sick right now.Heartbroken I swear down. Sorry to the fans and Everyone back home. It ain’t over till it’s over. #gutted