We recently wrote about new research that highlighted the impact Twitter has on memory and how Twitter users are highly receptive to content. This has implications for brands on the platform and how they can benefit from a focus on content.

The research looked at the areas of the brain responsible for emotional intensity, sense of personal relevance and long-term memory encoding. The results told us a number of things. They told us chiefly that content is more memorable on Twitter when compared to other digital platforms. But in essence it also helped us to understand why users do what they do and it allows us to add another layer to the story about brands on Twitter.

In previous research, we’ve shown how Promoted Tweets can impact upper funnel brand metrics, such as brand awareness and consideration. Now with our most recent research, conducted by Neuro-Insight (@neuro_insight), we know why this is so and how it can impact what brands do on Twitter.

Using this research as our basis, we’ve come up with five ways brands can benefit from having a focus on content. These include making branding instantly identifiable, prompting users to interact and using narratives to drive stronger engagement, which are all things that the Twitter timeline lends itself to.

This is a rule of marketing that many are well aware of. However, it is important to remember that users are only exposed to branding for a very short period of time whilst browsing Twitter. Add to this the fact that 80% of users are accessing Twitter via a mobile device. This means that brands need to make their most powerful assets work hard and fast.

In the case of Twitter, this means having a profile photograph that uses elements of brand iconography that are most immediately recognisable. This may be the logo (rendered as large as possible), but use of a block colour or shape associated with the brand can work very effectively, and brands should resist the temptation to embellish logos or add additional messaging, which will only compromise the logo itself. 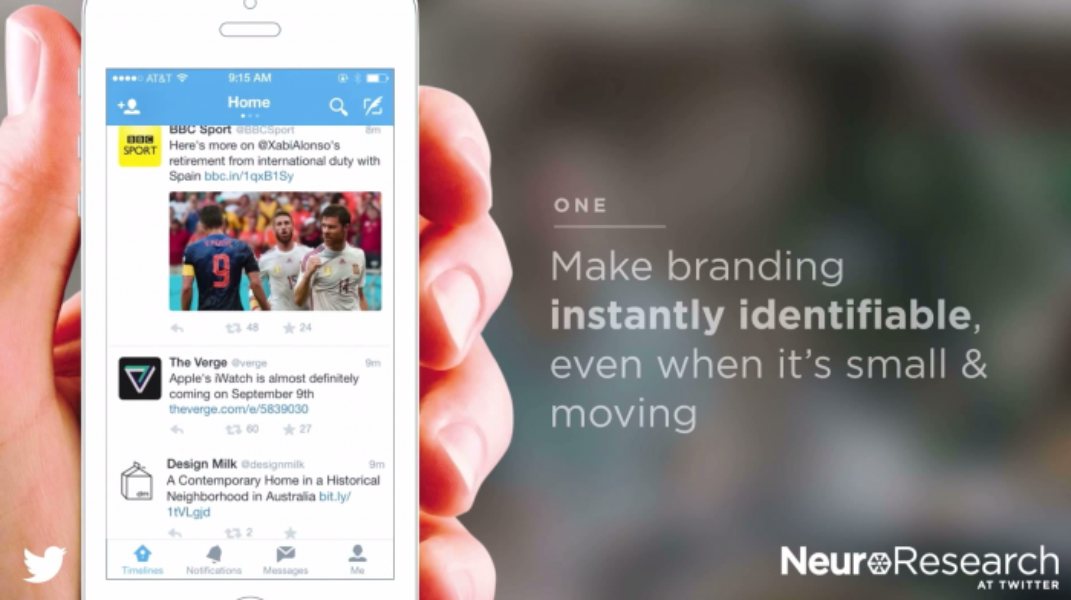 There’s a strong correlation between emotional intensity and memory encoding. Simply put, the stronger the emotional impact, the better a message is likely to be remembered.

Using pictures and video to connect with consumers will help brands make this connection on first viewing, as it is the kind of content that often resonates most strongly.

Targeting can also play a role here. Twitter allows advertisers to increase their relevance to consumers by focusing their campaigns on consumers who are interested in what they have to offer through the use of tools like geo, keyword and interest targeting. A message targeted at people to whom it has particular resonance is more likely to elicit a strong emotional response. 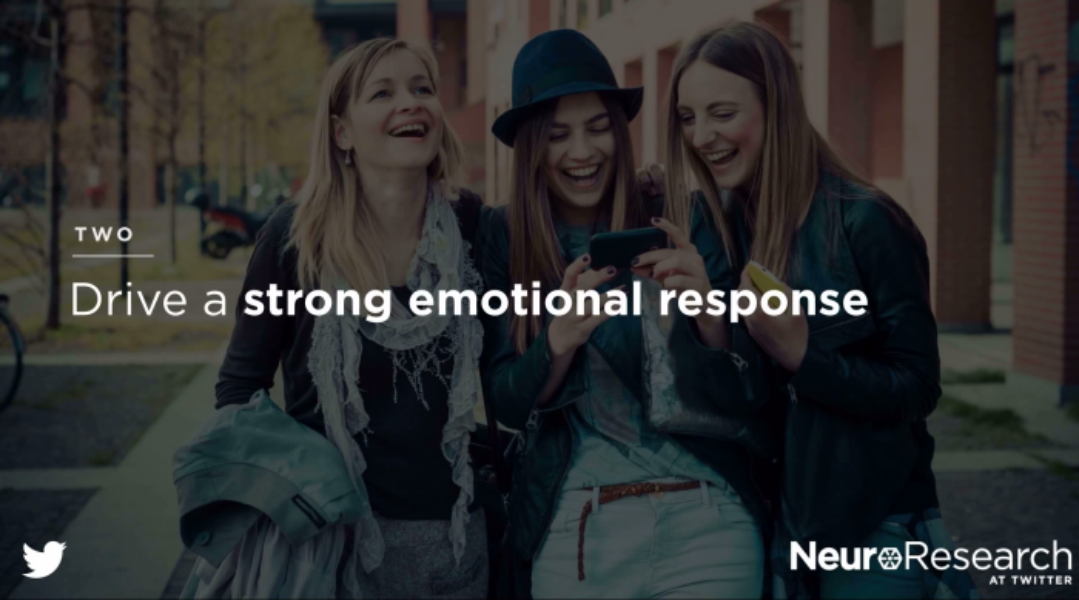 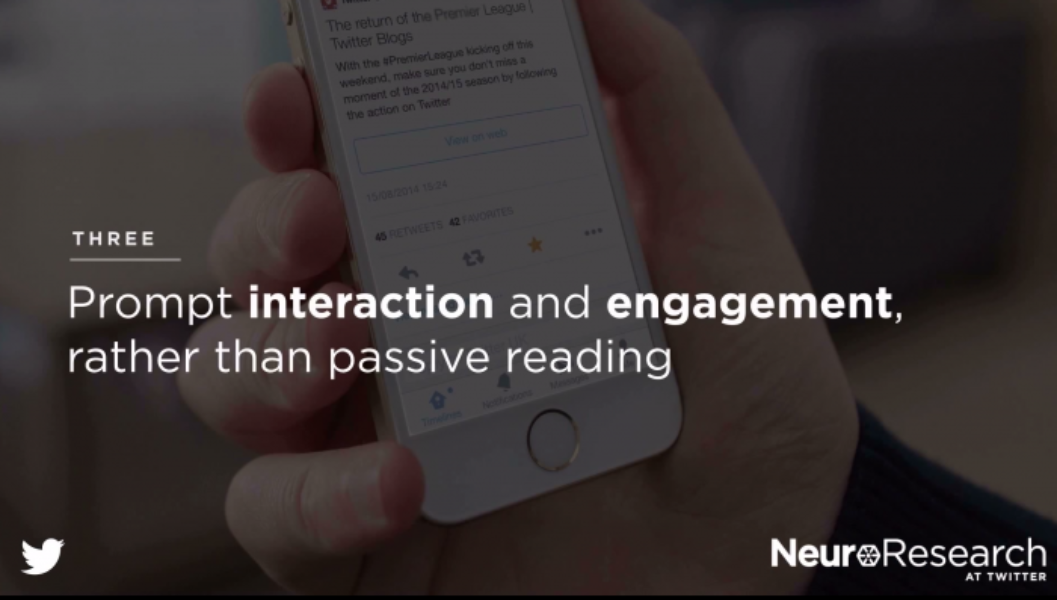 If your brand is prompting a call to action, messages appearing on the landing page following a click will have a strong impact. Memory encoding levels are highest immediately after a click-through, so your brand needs to capitalise on this post click anticipation.

This is a key opportunity that can be seized and it’s important to ensure that both branding and core messages are bold and clear to have the best chance of engaging users and being encoded into memory. 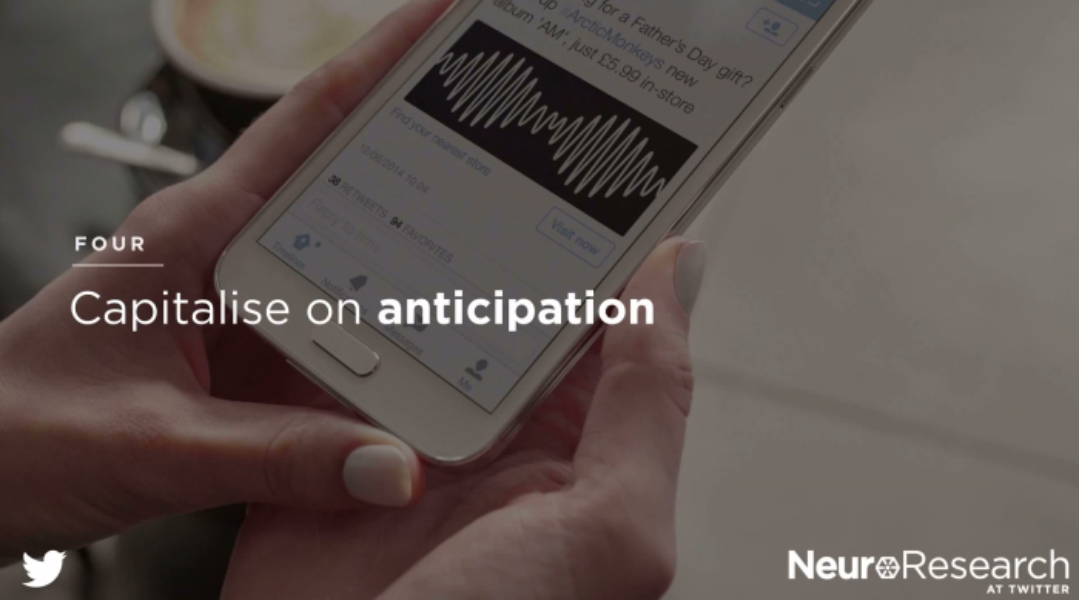 Content that tells a story is a key driver of memory encoding. The study looked particularly at Vine videos and found that Vines with a sense of narrative development that is to say a beginning, middle and an end, were far more memorable than those Vines lacking such a structure.

This highlights not only how people are more receptive and engaged with what they are experiencing on Twitter, but that for those putting great content on Twitter there is strong chance that it will stick in the long term memory of users. 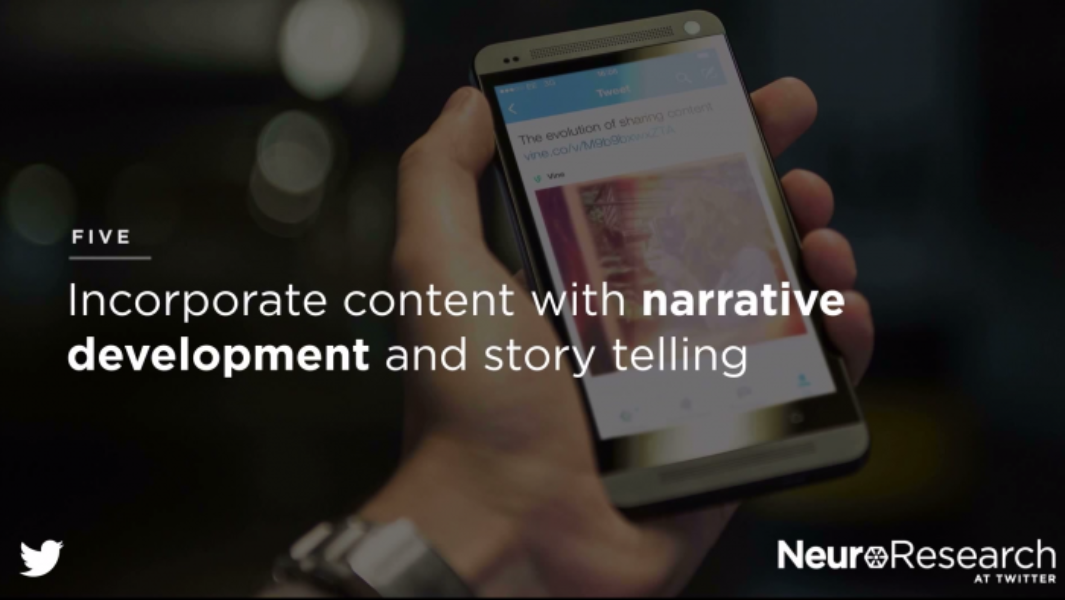 In order for brands to leverage this and make the most of an audience that’s highly receptive to content and interaction on Twitter they need to make sure that their branding is instantly identifiable; that it drives a strong emotional response; that it prompts users to interact; that it capitalises on anticipation and incorporates storytelling techniques.

The opt-in study, carried out in July 2014, included 114 participants aged 18-65, with an even split of men and women. Participants wore a visor with lights and a headset with sensors that measured the tiny electrical pulses in the brain while using browsing the web and using Twitter during a 25 minute session. By recording the neural processing speed and the location of electrical activity in the brain, researchers were able to understand which activities and which messages were registering in the parts of the brain responsible for emotional intensity, sense of personal relevance and long-term memory encoding.