Within a couple hours on a morning in late April, @liamgallagher sent a series of six Tweets that spelled out the word “Oasis” — a possible hint that iconic band Oasis might be re-forming. It was breaking news on Twitter; collectively the six Tweets were retweeted more than 130,000 times.

The story highlights how important music is to Twitter users, whether about breaking news, updates about favourite artists, or discovering new music or festivals. New research by Vision Critical (@visioncritical), commissioned by Twitter UK, confirms this interest. The research found that more than half of UK users (53%) say they see breaking music news on Twitter, and two-thirds say they see people tweeting about their favourite artists.

The research details how UK users turn to Twitter to follow music news and information. It also shows that while sport is a dominant theme of this summer, music and Tweets flow through all of that — and notably through Britain’s biggest musical festivals.

The research found that people use Twitter for everything from finding out about tickets to checking the line-up to immersing in the festival buzz. And this summer, as many as 54% of UK users will be using Twitter to follow festivals.

Festivals, and Glastonbury in particular, aren’t only about live music; they are also major TV and second-screen events. Last year BBC Two’s Glastonbury show was the most-mentioned TV show during the week of the Festival, with more than 600,000 Tweets sent.

This year, as bands like @arcadefire prepare for headlining slots @Glastofest, more than half of UK users (52%) plan to watch the BBC’s TV coverage of the Glastonbury Festival, which begins today.

Of those UK Twitter users who are watching on TV, 75% will be browsing Twitter. That means a wealth of content will be shared as users search for pictures and video clips being shared about Glastonbury.

For brands, these facts offer clear opportunities to connect, and many moments in which to do so. Vision Critical found that 33% of UK users believe Twitter raises awareness of brands sponsoring festivals. Additionally, the report found that one in six of those sharing content about festivals are sharing content from brands who aren’t sponsors.That’s echoed in the variety of brands already targeting those on Twitter interested in festivals, such as @EE (here), @TravelodgeUK (here), @HPUK (here) and @FGW (here). 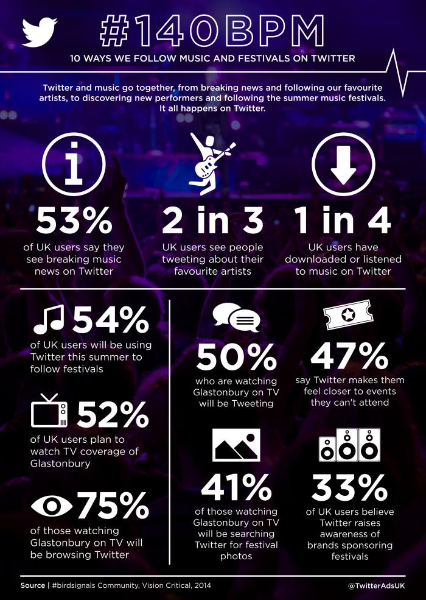