How the first #IndyRef debate played out on Twitter

On 18 September 2014, the people of Scotland will vote in a referendum on the question: ‘Should Scotland be an independent country?’

Tonight, we saw the first live televised #IndyRef debate between campaign representatives Alistair Darling (@TogetherDarling) and Alex Salmond (@AlexSalmond), and we’ve taken a look at how the conversation played out on Twitter.

There were 186,267 Tweets about the Scotland #IndyRef debate tonight, with a peak of 2,019 Tweets per minute (TPM)

The debate was broadcast by STV (@WeAreSTV, @STVNews and @ScotDecides) from Glasgow, but had viewers from across Scotland and beyond reaching for Twitter to share their opinions. This map shows how the conversation lit up on Twitter as the evening unfolded: 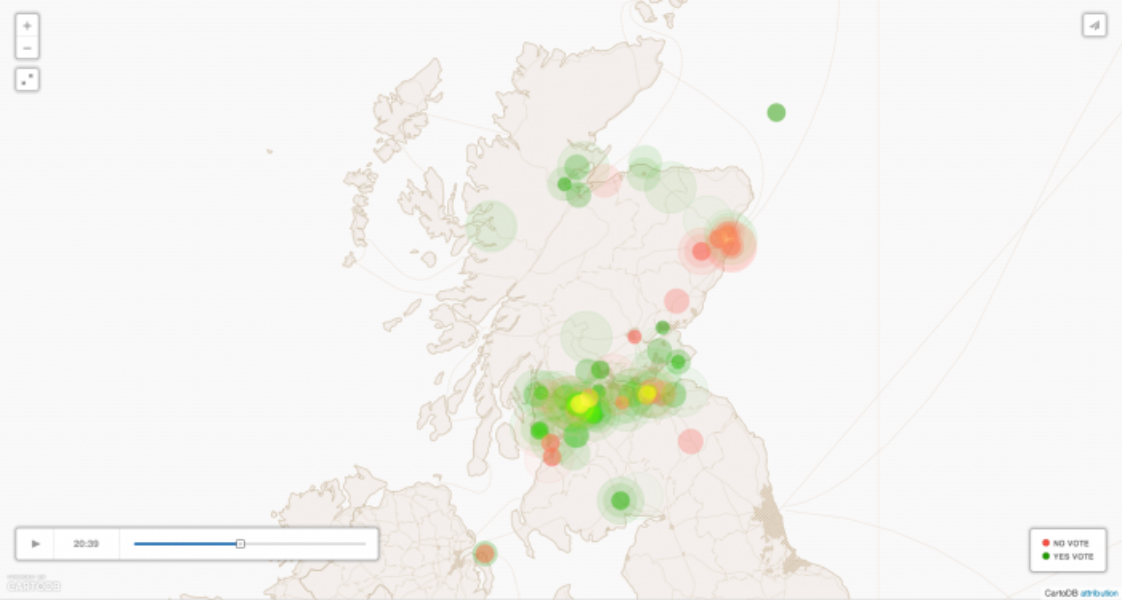 And with this Twitter Reverb visualisation created by @STVNews for their debate wrap-up, you can see how the conversation on Twitter reflected the highs and lows of the debate, as viewers came together to share their commentary, views, witticisms and criticisms:

The moments that had viewers tweeting the most all appeared during the cross-examination section as the campaign representatives were able to question each other:

The top three most tweeted-about moments in terms of Tweets per minute (TPM) were:

And whilst some strongly held political views were exchanged on stage, the event was not without humour — with one of the most retweeted messages of the evening coming from the parody account @Queen_UK, who likened the broadcast to a game show:

Hashtags join conversations together and allow people to find others talking about the same topic as them. The five most popular hashtags related to the debate were (in order):

Over the course of the day, the most-mentioned campaign was the ‘Yes’ campaign, with 72,000 Tweets about it, more than double the 31,000 Tweets about the ‘Better Together’ or ‘No’ campaign. However, these numbers only take account of Tweet volumes, not sentiment.

As the broadcast came to a close, both leaders sent a Tweet to give their verdict and continue the debate on Twitter:

As the political campaigns build momentum ahead of the vote on September 18, it will be fascinating to see how the campaigns continue to use Twitter to tell their stories, debate and persuade voters in what is shaping up to be a lively and engaging political clash.