Last night, @BiteTheBallot hosted the leader of the Green Party (@TheGreenParty) Natalie Bennett (@natalieben) for a #LeadersLive debate. It was the first in a brand new series of video interviews giving young people the chance to grill the UK’s leading political leaders, live and online.

The debate took place in front of a studio audience made up of influential internet stars, and had Twitter at its core. Bennett answered questions Tweeted in by those following along at home, and people could vote with #YesNat or #NoNat to let her know what they thought of her policies.

Bennett answered questions on three areas of her choice: jobs, education and environment. A fourth topic was chosen by the audience with a Twitter poll created by PulseLive (@PulseLive). 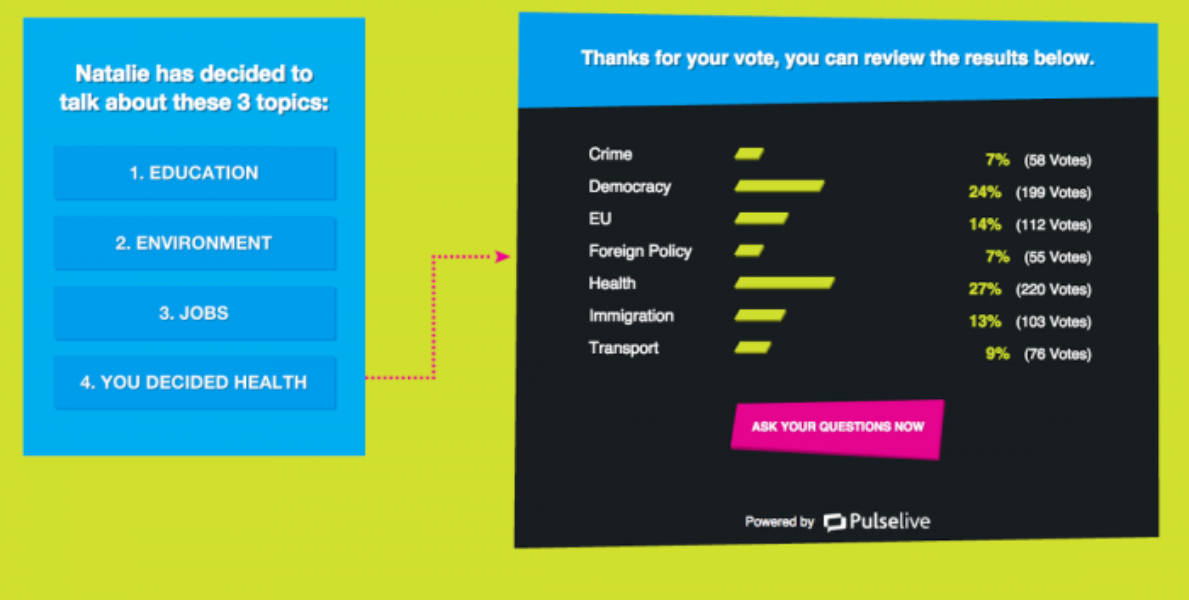 The interview was live-streamed on YouTube and Twitter, and was chopped up into mobile-friendly bite-sized video chunks that were Tweeted out from @BiteTheBallot and @ITVNews, giving people who couldn’t tune in for the live stream the chance to catch up on the best bits while on the go.

Host Rick Edwards (@RickEdwards1) put questions to Bennett that had been Tweeted in, covering a range of questions including drug laws and the Green Party’s environmental record. The debate trended across the UK as thousands of people joined the conversation.

Entrepreneur and Bite The Ballot ambassador Jamal Edwards (@jamaledwards) was part of the studio audience. Talking about the debates, he said: “I am excited to be bringing a UK first and evolving our democracy using social media.

“We don’t need a revolution, we just need participation and to engage and empower young people in the decisions affecting them will lead to greater involvement and benefit our country.”

Here’s a selection of the biggest moments from last night as they played out on Twitter.

Ahead of the general election next May, all five major UK party leaders will take the stage and answer questions from young people. Check them out at the following dates and times: