Being able to gauge consumer intent to purchase is key metric for digital marketers. Using Promoted Tweets can play a big part in that story as new research reveals how they perform 20% better than organic Tweets in driving brand consideration. 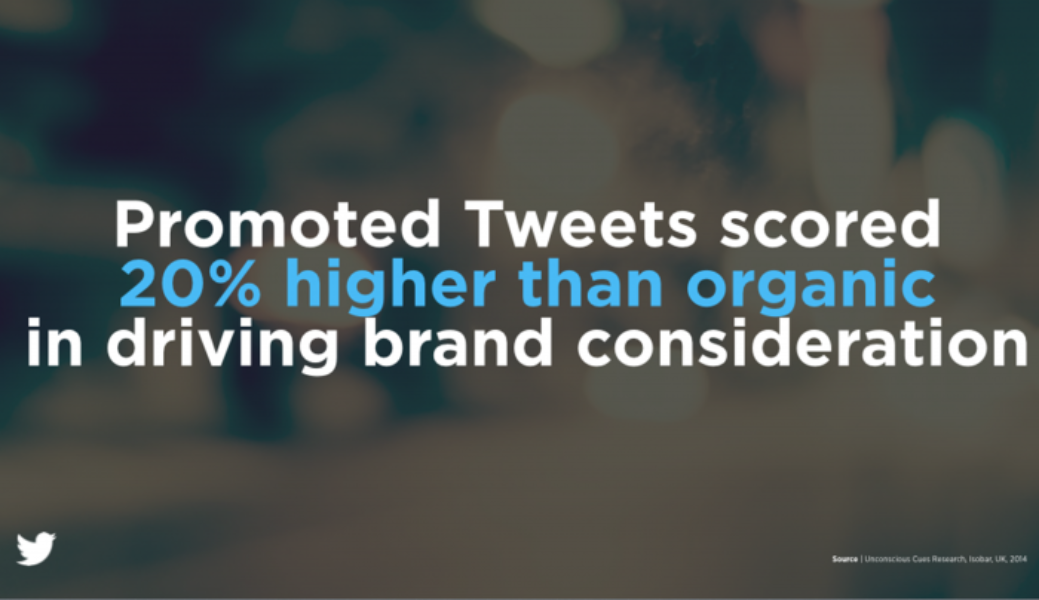 The ‘Unconscious Cues’ research*, conducted by the digital marketing agency, Isobar and researchers from Cambridge University, was based around a fictional fashion brand created for the study. It found that Promoted Tweets play a key role in preparing brand followers for a “commercial conversation” and consistently drove three key commercial awareness metrics:

The right tone of voice

One factor highlighted by the study was Promoted Tweets. Another focus area was the importance of tone of voice, which is a key barometer to success on Twitter in terms of developing trust and driving purchase intent. In addition to the tone, the Isobar research examined several other unconscious cues to understand the impact such factors can have upon likeability and consideration when consumers interact with a Twitter account for the first time.

We know that certain tones of voice, such as those employing humour, can be very effective on Twitter. The research highlights the different ways that consumers respond to humorous, serious and more responsible (as expressed by socially responsible values) approaches to the tone of voice used in a brand’s Twitter bio.

“Women most preferred the ‘funny’ biography, but were also slightly more responsive to the ‘responsible’ biography compared to men.”

The research points to the importance of using variations in tone of voice in Twitter bios as a way to conduct particular types of conversation. For example:

The research shows that brands benefit from focusing on what they’re looking to achieve in their brand bio and Tweets. They should be clear as to whether their content strategy is focused on building brand affinity or on future purchase intent.

Finally, the research looked at the number of Twitter followers a brand has and how that can have an impact on developing trust and driving purchase intent.

However, building a follower base is one factor, that combined with good use of tone of voice and Promoted Tweets, can help marketers achieve stronger results on Twitter.

The Isobar study was based an online panel of 4,511 UK Twitter users
and measured individuals’ perceptions of a brand’s Twitter pages across various conditions. For the study, respondents, who had consented to participate, were shown a fictional US fashion brand called Resident that they were told planned to launch in the UK. As part of the study users were shown three test Tweets.

You can read more methodology behind the research here.