Tucked away from the bustle of Islington in north London, The Drapers Arms is a stripped down gastro pub that sits at the heart of the local community and the foodie community on Twitter.

The platform is how in part, says publican Nick Gibson, that the @DrapersArms gives its community access to what the pub is about, its values and what it does.

“I like to be contemporary, so engage with London’s food community more broadly speaking…I get energy from them, ideas from them, and I feel I’m part of something that matters to me and to them,” he says.

The @DrapersArms has been on the platform for almost five years, from the start of its latest incarnation, and Twitter has played a useful role from the start, explains Gibson, who we spoke to as part of @TwitterUK’s #RestaurantWeek event. 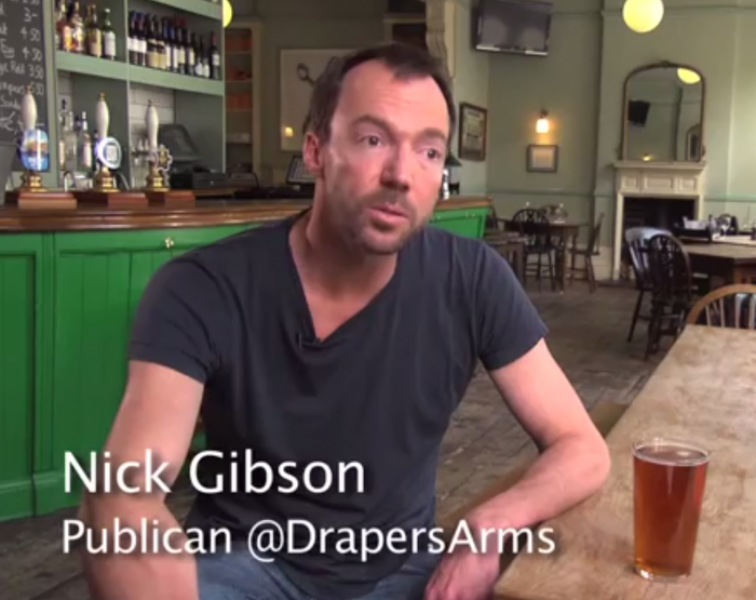 He explains: “I signed up and straight away, I suddenly had a whole load of friends, people who talked about things I was interested in and it gave me this power of finding things out, but also telling people what we were doing really quickly.”

As an owner-operated business, Twitter touches all parts of Gibson’s business. He has used it to find a new extractor fan inside 12 hours and sell out events within 24 hours. Running through all of this activity is how Twitter helps convey the personality of the @DrapersArms. Essential to that, argues Gibson, is to have the right person tweeting.

The most important thing I think to be successful on Twitter is to have someone empowered to have a personality.

“The most important thing I think to be successful on Twitter is to have someone empowered to have a personality. Therefore to communicate what you’re about…so if you are expressing who you are well, then it is engaging, if you’re anodyne it’s boring. So the thing to do is to find someone who is proud of their job, who enjoys their job, and who can genuine communicate enthusiasm.”

There has been little debate about this during the conversations we’ve had for #RestaurantWeek: a great restaurant food Tweet comes with a picture. It’s a sentiment Gibson firmly endorses.

Watch our interview with The Drapers Arms