Fittingly, @pizzapilgrims began life with a pilgrimage through Italy and a classic three-wheeled van. From there, the pizzeria seems to roll from strength to strength from its Soho home.

James and Thom Elliot built up a loyal following from their days of serving food solely through the van at street markets. Today they reach a much broader audience through the restaurant and through Twitter.

“There’s a guy on Twitter called @markymarket who tweeted us saying he had some wild garlic. He came in at two o’clock with wild garlic, and it was on the menu at six o’clock,” says James.

The connection Twitter provides has also led to collaborations such as the one that @pizzapilgrims is planning with Soho Tapas bar @BarrafinaFRst. 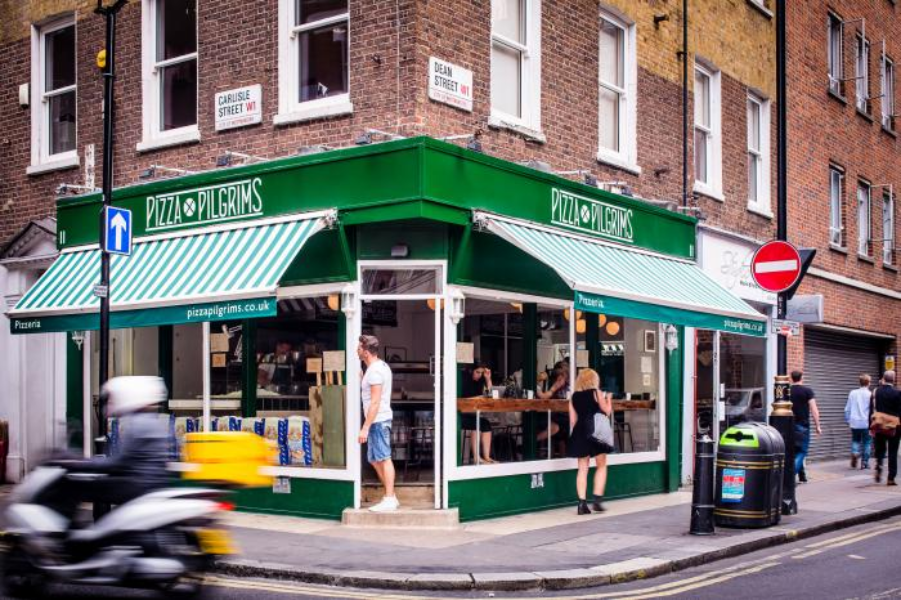 According to Thom, it’s all happened through Twitter: “We’re going to share ovens, they’re going to come and do some pizza stuff and we’re going to do some more seafood stuff and it’s going to be great, and it’s all come about through us mutually being on Twitter.”

As well as those collaborative efforts, Twitter has also provided @pizzapilgrims with “wow” moments, as Thom explains.

“We had this amazing wow moment when we had a rather heated debate with @loydgrossman about Aperol and what kind of olive you’re allowed to serve with it,” he says.

We had this amazing wow moment when we had a rather heated debate with @loydgrossman about Aperol.

As James puts it, Twitter creates a “level playing field where you can speak to people that inspire you” and they’ll come back to you and reply.

Both James and Thom are quick to say that it’s the visual element — the picture that tells a thousand words — that makes a great Tweet and works so well for @pizzapilgrims, as well as the ability to ask diners for feedback. For example, says James, you can use Twitter to really get an opinion on issues that divide many pizza lovers, such as whether or not people like anchovies.

“That’s the one that always sticks in my head. Asking people whether a special should have anchovies on it. I don’t think there’s any ingredient in the whole world that divides opinion more like anchovies,” he says. James agrees: “It’s huge, so many responses to #anchoviegate.”

Watch our interview with Pizza Pilgrims